Compare delivery offers from restaurants in Atlanta. Easily find which delivery service offers the cheapest or quickest delivery from any restaurant.
Enter your address to see the best deals for your area!
Search
Restaurants Available in Atlanta
Loading...
FoodBoss
We compare delivery fees from the largest number of restaurants possible. Period. The difference is clear. 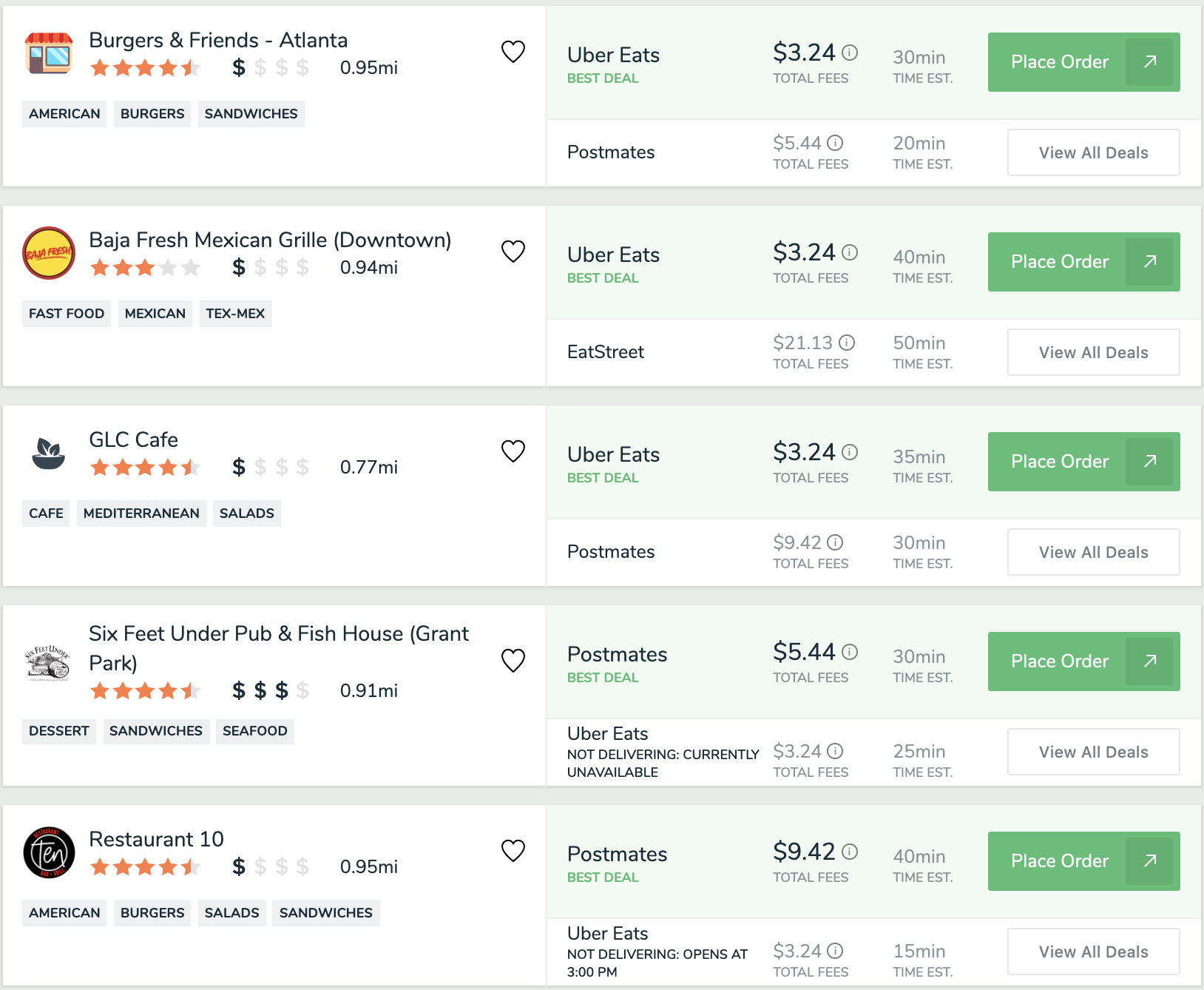 Calculate Your Yearly Savings with FoodBoss!
On average, Users in ATLANTA save 37% on total fees and get their food 21 minutes faster.
Atlanta Food Delivery Guide
Atlanta, the capital of Georgia, is a city rich with history and cultural significance. The city played a significant role in the Civil Rights Movement as leaders like Martin Luther King Jr. organized grassroots networks which worked to end to racism and promote equality. The 1996 Olympics sparked a revitalization effort and resulted in an upgrade to much of the city’s infrastructure. Though located deep within the South, Atlanta is notable for its diverse and global feel. Music has long been a part of Atlanta’s history. Once a city celebrated for its country music scene, Atlanta is today regarded as a hub for hip-hop with many famous artists calling this city home. Dining options range from Southern Comfort food to international cuisine, and all across this metropolis, you will find great restaurants serving up class and newly inspired dishes.
Atlanta Neighborhood Guide

Comprising the north part of the city, Buckhead is an affluent area of Atlanta. The area is home to many art galleries, upscale malls, large mansions, and some of the best restaurants and nightlife in the entire city. Peachtree Road winds through the neighborhood where many annual parades are held. Also along this road, you’ll find plenty of the great dining locations this neighborhood boasts.

On Atlanta’s east side sits Inman Park. The first planned suburb of the city, Inman Park has transformed since its founding over 120 years ago. Victorian mansions are spread throughout the neighborhood along with many more modest homes. Every year Inman Park hosts the Inman Park Festival which draws in thousands of visitors to the community and is entirely run by neighborhood volunteers. With many small brunch spots and wine bars across the neighborhood, this area is a trendy spot to find a great meal.

Fried Chicken consists of pieces of chicken that have been either battered, breaded, or floured and then fried. Methods of frying include pan frying and deep frying. The distinct feature of this type of chicken is the crispy outside of the chicken, which develops a delicious crust. With many different seasoning options, there are a lot of ways to make great fried chicken. This dish, also known as Southern fried chicken, is very popular in Atlanta. Try it from some of Atlanta’s most famous restaurants: The Original J.R. Crickets and Hattie B’s Hot Chicken.

Known as the Peach State, it’s not surprising that cities in Georgia, such as Atlanta, are well known for some dishes made from this juicy fruit. Peach Cobbler is a traditional dessert served across the South. Made similarly to a pie, Peach Cobbler is often served with a scoop of ice cream to make it even sweeter. Try this delicious dish at Mary Mac’s Tea Room or Busy Bee Cafe.

Few dishes end up with movies named after them (especially ones with such a strange name), which proves how popular and well known this dish is. Fried Green Tomatoes are made by slicing tomatoes, seasoning them, coating them each in some cornmeal or flour, and then frying them until golden brown. A treat during the summer months, it is a must try appetizer if you find yourself in a city such as Atlanta. Try them from city restaurants such as Sweet Georgia’s Juke Joint and West Egg Cafe.