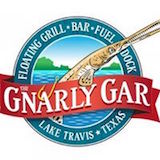 Searching for "Southern Near Me"? Gnarly Gar has some of the best Southern in Lago Vista. Located at 18200 Lakepoint Cv, Gnarly Gar is a convenient option that delivers to the area around Lago Vist...show more

Served with cocktail sauce and lemon.

Slow-roasted pulled pork, ham, and swiss on a grilled pressed amoroso's sub roll. Served with a side of sliced pickles and mustard.

Slow-roasted pulled pork mixed with BBQ sauce, topped with red onion and dill pickles on a grilled roll. Served with a side of coleslaw.

Grilled salmon filet topped with a balsamic reduction. Served with rice and vegetable of the day. blackened or lemon pepper.

Grilled ahi tuna steak topped with a lemon garlic butter sauce. Served with rice and vegetable of the day. blackened or lemon pepper.

Your choice of salmon or ahi tuna, grilled and topped with pickled red cabbage and pico de gallo. Served on corn tortillas with a side of chipotle ranch, rice, and refried beans.

Eggs scrambled with pico de gallo, cheese and crispy tortilla chips. Served with breakfast potatoes, refried beans, corn tortillas and a side of our homemade salsa.

Sourdough bread hand-dipped in egg and cinnamon, then cooked on a griddle until golden brown, served with cream cheese icing, maple syrup and bacon.