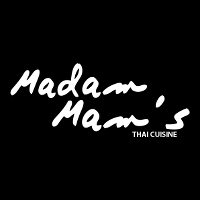 Select from one of our sauces below.

Your choice of thin-sliced grilled beef, grilled chicken, or tofu tossed in hot and spicy garlic, lime sauce with a bed of green salad, cucumbers, red onions, and tomatoes.

Same as NS-8 only with udon noodle.

Rice vermicelli or flat rice noodle with tofu and baby bok choy in a hot and spicy sauce made of tomato, pickled garlic, special bean curd sauce with Thai pepper and lime juice.

Another version of pad thai with a hint of tamarind. Sweet and spicy.

Thai red curry a little sweet and milder than others with pineapple chunks, and kaffir lime leaves.

Stir-fried with eggs, pea, and carrot, and mixed soy sauce.

A creamy version of tom yum, with a hint of Mam's roasted chili.

Stir-fried green beans with choice of meat with mixed soy sauce and garlic.

A crispy and cozy wok-fried egg resting on a bed of rice then topped with a choice of ground meat that's stir-fried with white onion, tomatoes, garlic soy sauce & finally garnished with cilantro.