Compare delivery offers from restaurants in Chicago. Easily find which delivery service offers the cheapest or quickest delivery from any restaurant.
Enter your address to see the best deals for your area!
Search
Restaurants Available in Chicago
Loading...
FoodBoss
We compare delivery fees from the largest number of restaurants possible. Period. The difference is clear. 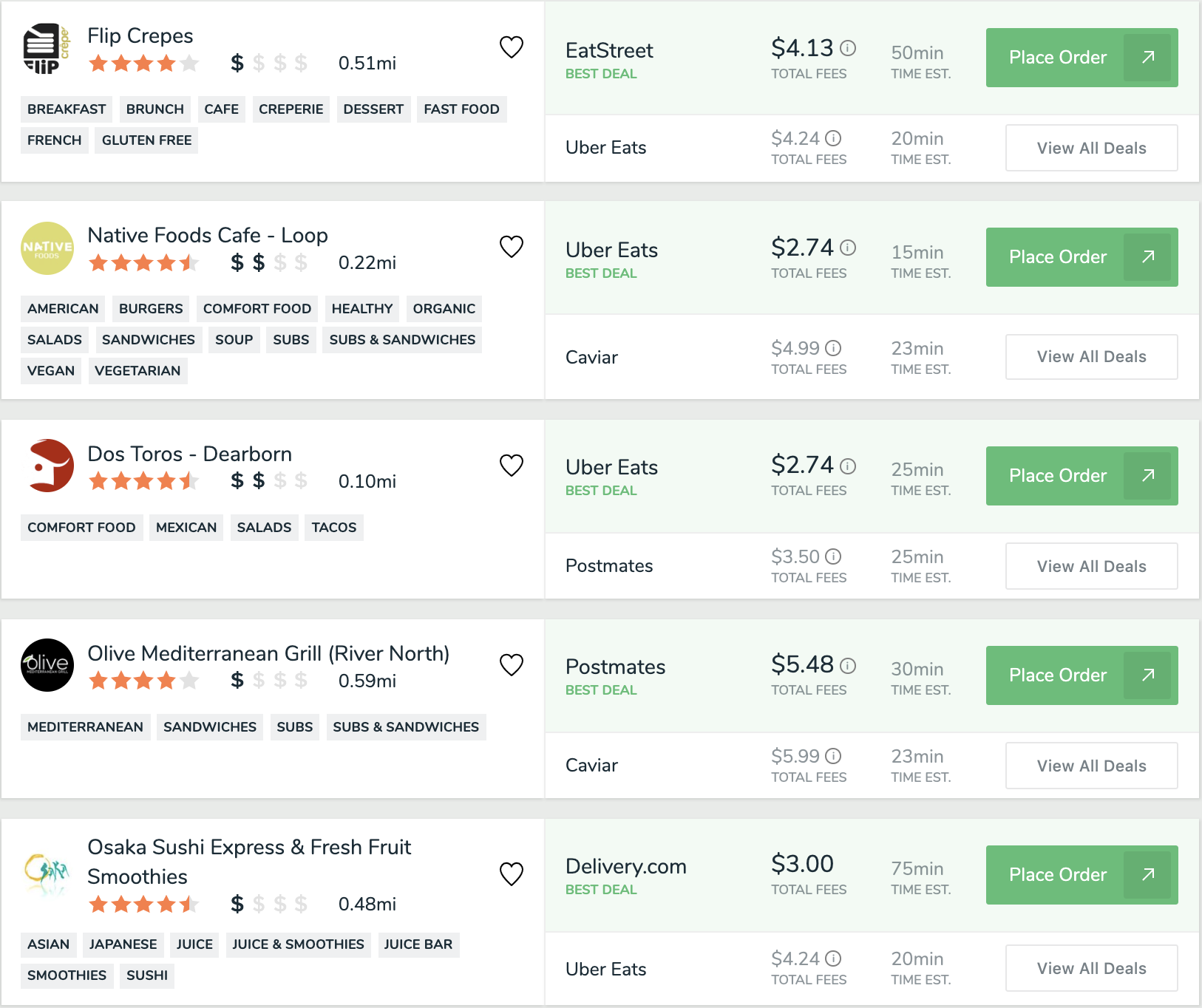 Calculate Your Yearly Savings with FoodBoss!
On average, Users in CHICAGO save 37% on total fees and get their food 21 minutes faster.
Chicago Food Delivery Guide
Located on the shores of Lake Michigan, and in the heart of the Midwest, Chicago is one of the largest cities in the United States. The Windy City is famous for iconic architecture, and examples include the Willis Tower (previously Sears Tower), John Hancock Center, the Wrigley Building, and the Tribune Tower. With beautiful parks along the lake and spread throughout the city, Chicago can make any outdoor enthusiast feel at home in a seemingly concrete jungle. The fierce Cubs and White Sox baseball rivalry between the North Side and South Side is intense, but eased when Chicago collectively roots for the Bears, Bulls, and Blackhawks. The food scene is top notch, and the rest of the country is starting to take note. While Chicago may have originated as a steak and potatoes sort of town, times have changed, and today you can find numerous award-winning restaurants sure to please any food critic.
Chicago Neighborhood Guide

Known for its active nightlife with plenty of bars, restaurants, and entertainment choices, Lincoln Park is a beautiful neighborhood on the North Side of the city. Attractions like Lincoln Hall, the Lincoln Park Zoo (free admission), and Steppenwolf Theatre Company call this neighborhood home. Situated along Lake Michigan, there are great views of the city from North Avenue Beach in the southeast corner of the neighborhood. You’ll find lots of restaurants with great delivery offerings in this area of the city.

Long a hub for immigrants to Chicago, Pilsen was named by Czech immigrants who named it after a city in what is today the Czech Republic. Today, Pilsen calls itself home to a large Mexican-American population. Murals dot the landscape on walls, houses, and almost anywhere else you can imagine. The neighborhood is also home to the National Museum of Mexican Art. Alongside many independent and unique stores, you’ll find numerous restaurants that serve authentic Mexican cuisine.

Perhaps the most obvious - and most famous - Chicago specific cuisine option is deep dish pizza, otherwise known as Chicago Style Pizza. An iconic part of Chicago’s food heritage, this dish is best identified by its tall outer crust and copious amounts of cheese added underneath the chunky tomato sauce. Usually eaten with a knife and fork (trust us), this dish is about as Chicago as it gets. Try it from some of Chicago’s most famous pizzerias: Lou Malnati’s, Giordanos, or Gino's East.

An all-beef hot dog on a poppy seed bun piled high with mustard, sweet pickle relish, onion, tomato, a dill pickle spear, sport peppers, and a dash of celery salt. Try it from some of Chicago’s most famous restaurants: Gold Coast Dogs or Chicago’s Dog Haus.

Italian Beef is a sandwich, originating in Chicago, composed of thin slices of seasoned roast beef, simmered and served au jus (known by locals as 'gravy') on a long Italian-style roll. The sandwich's history dates back at least to the 1930s. Try it from some of Chicago’s most famous restaurants: Al’s Italian Beef or Roma’s Italian Beef.