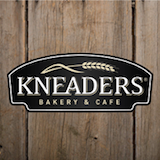 Your choice of ham, sausage or bacon with cheddar cheese and two fresh cracked eggs. Served on a European butter croissant.

Your choice of ham, sausage or bacon with cheddar cheese. Served on a European butter croissant.

Steel cut Irish oatmeal served with your choice of topping and brown sugar on the side.

3 silver dollar size pancakes with a banana sliced over the top. Served with homemade caramel syrup and choice of milk or juice.

Cup of fresh fruit or oatmeal and choice of drink.

Your choice of smoothie and pastry.

Cafe Sandwich on a Croissant
$7.29

Kneaders sauce, provolone cheese, lettuce, tomatoes, red onions, salt and pepper on a whole croissant. Served with a complimentary side of spring greens and balsamic vinaigrette.

Kneaders sauce, provolone cheese, lettuce, tomatoes, red onions, salt and pepper. May be served as a whole or half sandwich on your choice of bread.

Ranch dressing, Swiss cheese, lettuce, tomatoes, red onions, salt and pepper. May be served as a whole or half sandwich on your choice of bread.

Honey mustard, mayonnaise, Swiss cheese, lettuce, tomatoes, red onions, salt and pepper. May be served as a whole or half sandwich on your choice of bread.

Three layers of French country sourdough bread with muenster cheese, provolone cheese and fresh pesto butter. May be served as a whole or half sandwich.

We slice fresh bananas and cover them with smooth banana cream and whipped topping. This fruity pie will add an unexpected flavor to your holiday feast.

Take an instant trip to the tropics with this velvety pie. We mix real coconut with our sweet custard filling and cover it with a layer of smooth whipped topping. Then, we sprinkle toasted coconut to add a flavorful crunch.

Take it from kneaders employees, you need this jolly pie at your table. The sweet combination of soft cream cheese and pureed raspberries makes this pie a kneaders team favorite.

Made with plump raspberries, blueberries and blackberries, this pie boasts the best of the harvest. The flaky, decorative double crust makes it a delightfully elegant dessert.

This pie is sweet, salty, and festively green. We spread tangy lime filling inside a pretzel crust and garnish it with whipped topping and fresh lime.

Your choice of entrée served with grapes or chips, a kids sugar cookie and choice of drink.

A classic sourdough start is the secret to this crusty bread

A favorite at the bakery; the thin crust and moist, open grain interior create the perfect dipping bread.

This round loaf is topped with fresh rosemary and sea salt.

Classic long, french loaf made in the traditional European style.

This medium rye has an delightful mild flavor with just the right amount of caraway.

The perfect blend of asiago and parmesan cheeses baked in the bread.

Our Bread of the Month! Made with whole roasted cloves of garlic and cheddar cheese.

This muffin is made with our delicious zucchini pineapple nut bread batter, with added cocoa powder and chocolate chips. It has zucchini, coconut, raisins, pineapple, walnuts, brown sugar and chocolate It sounds a little crazy but its delicious.

Two types of semi sweet chocolate chunks, with a hint of brown sugar and vanilla.

The perfect soft crumbly delicious cookie. These sugar cookies are made out of a lemon sugar cookie dough then frosted and hand decorated with a vanilla icing. The shapes of these cookies change monthly.

Brownies with chocolate chips melted inside, topped with a chocolate fudge icing.

Yeasted dough layered with butter resulting in a flaky texture.

European croissants filled with raspberry and cream cheese, then dusted with powdered sugar.

Traditional vanilla cheesecake, with a layer of homemade raspberry filling and a graham cracker crust. Decorated with whipped topping and fresh strawberries.

Our delicious European chocolate croissants in a coconut custard. Served with our homemade vanilla bean sauce.

Made with our outstanding cinnamon rolls with chunks of apples, and topped with a brown sugar pecan streusel. Served with our homemade vanilla bean sauce.

Chocolate cake, with a mound of imported Swiss chocolate mousse, covered with imported chocolate ganache and topped with whipped topping.

These are a butter pecan cookie, rolled in powdered sugar. They melt in your mouth. To make things even sweeter you get two cookies for the price of one.

Fresh strawberries dipped in imported Swiss chocolate ganache then rolled in pecans or chocolate curls. Drizzled with ganache or dipped half and half.

Made from the same batter as our famous pumpkin bread, topped with homemade granola.

A shortbread tart shell filled with a tart lemon filling and topped with a golden brown meringue rosette.

Available in a variety of flavors and sizes.

This traditional vanilla cheesecake is layered with our homemade raspberry filling and delightful graham cracker crust. Decorated with whipped cream and strawberries, this treat will definitely impress on looks and taste. 8”

European Hot Chocolate is a European inspired gourmet sipping chocolate. With a rich cocoa bean flavor it is a step up to classic hot chocolate, topped with whip cream and mini chocolate chips. Served with whole milk.

Build your own hot chocolate! Pick one of our delicious flavors, topped with whip cream. Served with whole milk.

Delightfully Frozen! May be served with or without espresso, topped with whip cream. Served with whole milk.

This traditional vanilla cheesecake is layered with our homemade raspberry filling and delightful graham cracker crust. Decorated with whipped cream and strawberries, this treat will definitely impress on looks and taste. 8”