Compare delivery offers from restaurants in Detroit. Easily find which delivery service offers the cheapest or quickest delivery from any restaurant.
Enter your address to see the best deals for your area!
Search
Restaurants Available in Detroit
Loading...
FoodBoss
We compare delivery fees from the largest number of restaurants possible. Period. The difference is clear. 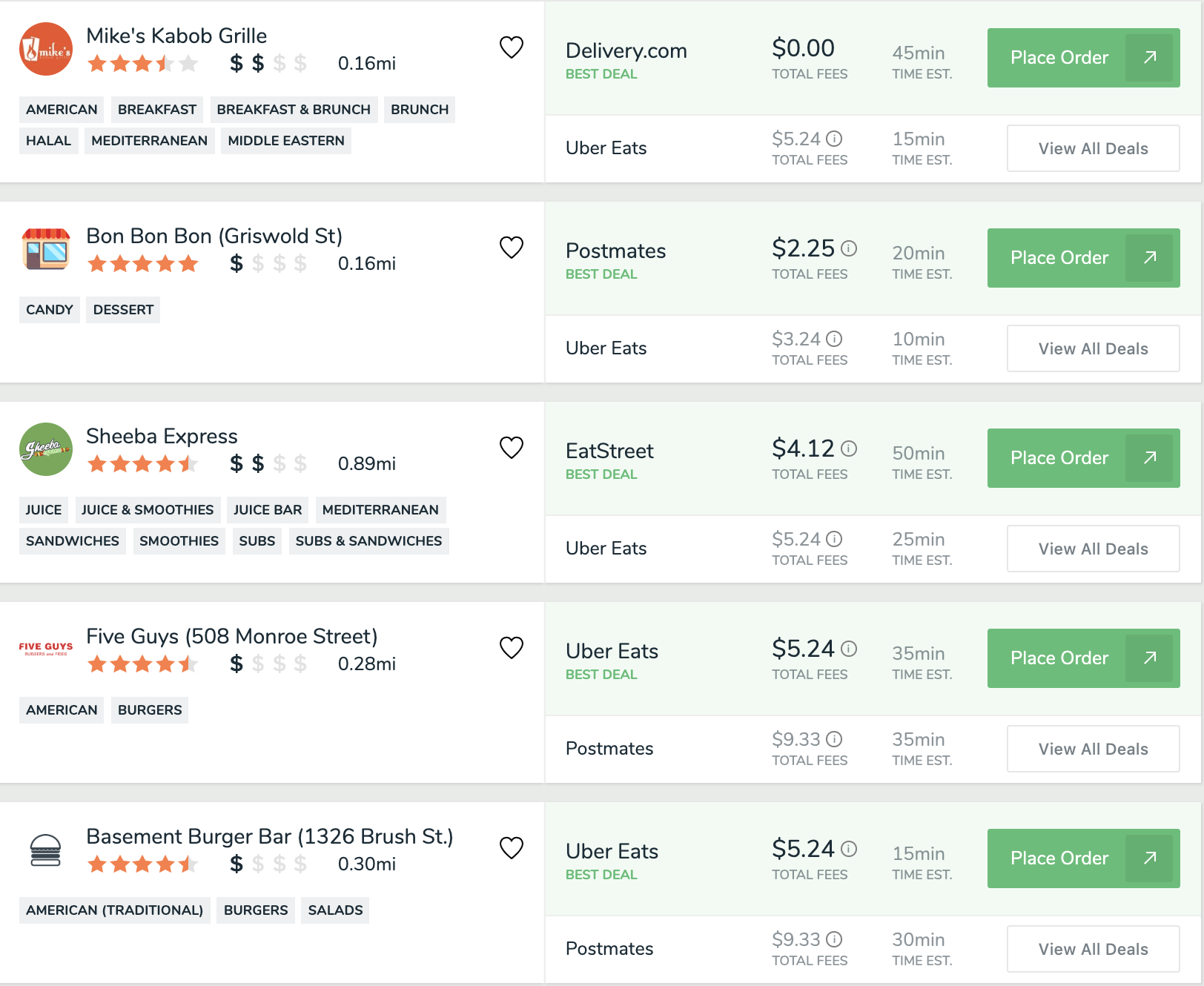 Calculate Your Yearly Savings with FoodBoss!
On average, Users in DETROIT save 37% on total fees and get their food 21 minutes faster.
Detroit Food Delivery Guide
Detroit was once a strategically crucial port city along the Detroit River that connected the Great Lakes region with the rest of the country and beyond. Today, the city is less known as a shipping hub but instead as one of the most important manufacturing centers in America. Best known as the home of the United States Auto Industry since Ford, GM, and Chrysler are all headquartered here, Detroit’s nickname, the Motor City, is more than suitable. Detroit is also well known for its musical impact on the Blues, R&B, and Jazz genres and is where the famous record label, Motown Records, was founded. A popular farmers market and Greektown area contribute to the cuisine of the city.
Detroit Neighborhood Guide

Located along the banks of the Detroit River in downtown Detroit is the Rivertown-Warehouse District. Once a simple warehouse and heavy industrial area, the neighborhood has become a trendy location in Detroit for its riverside location and great nightlife. Converted warehouses now house upscale lofts and apartments, and along Franklin Street, you can find many upscale restaurants, cocktail bars, and luxury boutique shopping stores. Attractions in the Rivertown neighborhood include the Riverwalk, the Milliken State Park Lighthouse, and Aretha Franklin Amphitheater.

This neighborhood’s name origin is fairly self-explanatory considering the area was initially settled by Irish immigrants fleeing the Potato Famine during the 1840’s, many of whom were from County Cork, Ireland. Situated a short way west from downtown Detroit, over the years Corktown has lost land as developments have encroached into the historic neighborhood. While the area is no longer home to the once enormous Irish-American population, it still has traces of its Irish roots with pubs, such as McShane’s, in the area.

Less well known than Chicago or New York style pizza, Detroit Style Pizza is no less unique and was developed right here in Detroit. What makes Detroit Style Pizza unique is its rectangular shape and extra thick crispy crust. Add whatever toppings you want for a great Detroit dish. Have it delivered to your door from Detroit Style Pizza Company or Detroit Beer Company today.

Corned Beef Egg Rolls, also known as Reuben Rolls, are a slight variation of the standard egg roll. Cooked the same as a standard egg roll, this snack has a filling made of corned beef, sauerkraut, and swiss cheese. You can also get dipping sauce for dunking. Order some today from Detroit’s own, Asian Corned Beef.

Paczki is a Polish dish made of deep-fried pieces of dough that have been formed into a donut shape but without a center hole. These donut like creations have a sweet filling on the inside. Once they have been cooked, icing or powdered sugar is sprinkled on top of them. This dessert is so popular in Detroit that the city celebrates Paczki Day annually. Try this iconic Detroit dish today with delivery from Donut Villa.