Compare delivery offers from restaurants in Houston. Easily find which delivery service offers the cheapest or quickest delivery from any restaurant.
Enter your address to see the best deals for your area!
Search
Restaurants Available in Houston
Loading...
FoodBoss
We compare delivery fees from the largest number of restaurants possible. Period. The difference is clear. 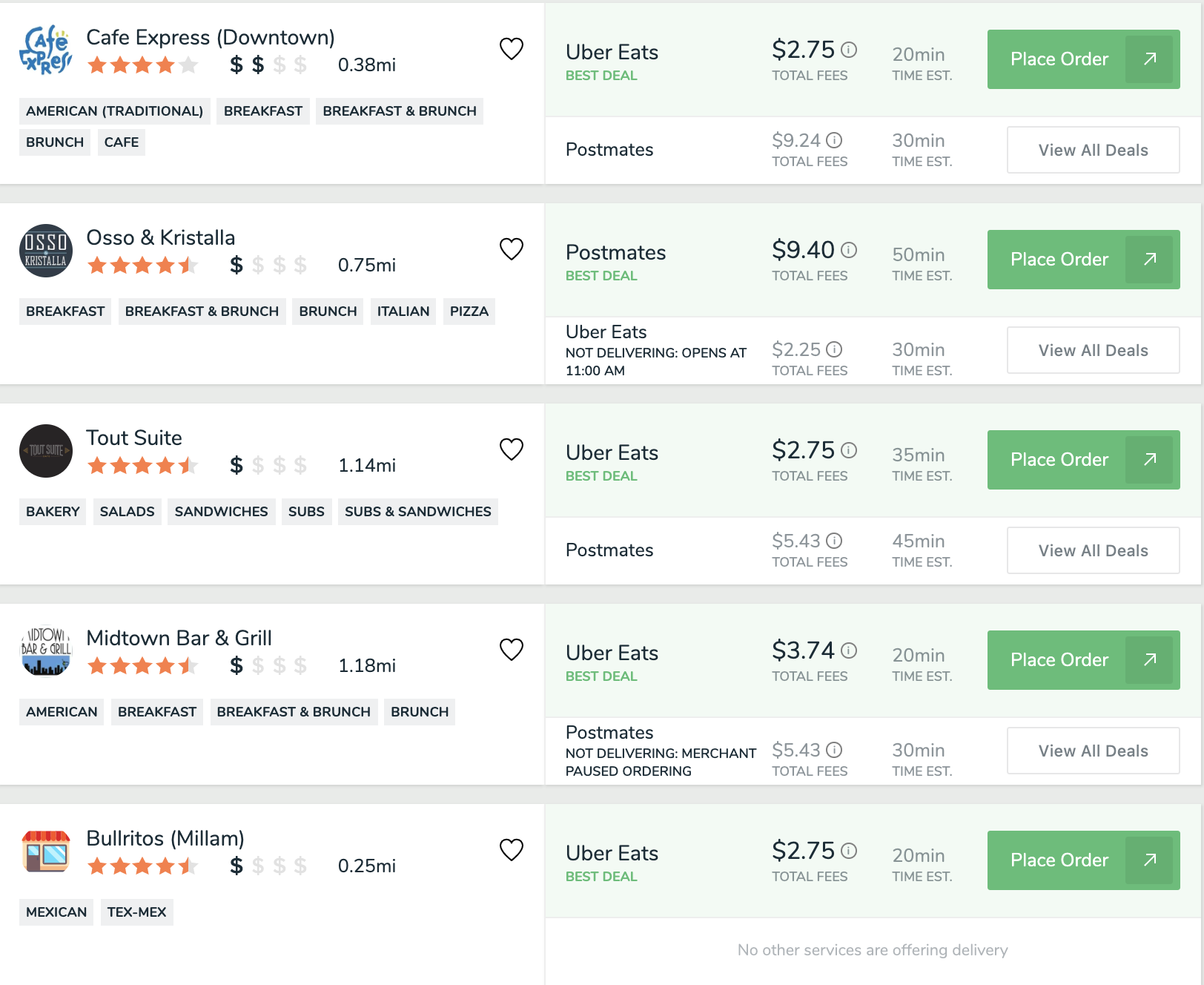 Calculate Your Yearly Savings with FoodBoss!
On average, Users in HOUSTON save 37% on total fees and get their food 21 minutes faster.
Houston Food Delivery Guide
Named after General Sam Houston, a hero of the Texas Revolution and eventual first President of the Republic of Texas, Houston has grown rapidly over the last one hundred years and today is the fourth most populated city in the country. As the population has grown, so has the economy and Houston is home to strong energy, manufacturing, aeronautics, and healthcare sectors. Located along the Gulf Of Mexico, Houston is also a key global shipping center. Often regarded as one of America’s “Best Food Cities,” the cuisine options here are overwhelming.
Houston Neighborhood Guide

Southwest of central downtown Houston and former hometown of Clark Gable lies Montrose. Dating back to 1911, this offbeat neighborhood is home of many art galleries, gay bars, cafes and the famous Rothko Chapel. You’ll find many thrift shops along Westheimer Curve where treasures lie in wait. Great views of downtown Houston can be seen at Eleanor Tinsley Park on the north side of Montrose and is a popular picnic spot for residents and visitors. Finally, there is a wide range of restaurant options from Mexican cantinas to BBQ joints.

Colloquially referred to as EaDo, the East Downtown district lies right near the heart of Houston. Attractions like the Warehouse Live concert hall, BBVA Compass Stadium, and 8th Wonder Brewery draw people to this neighborhood that until recently had been written off. The We Love Houston sign is in EaDo, and you will find many of the neighborhoods best restaurants and bars clustered around the soccer stadium along St. Emanuel Street.

A popular Southern cuisine dish, there are tons of places in Houston where you can try this dish. Similar to a wiener-schnitzel, this dish is prepared by coating a beefsteak with seasoned flour and then pan fried until it is golden and crispy, like fried chicken. A popular addition to the piece of meat is a thick coating of gravy served on top. Get it delivered from Frenchy’s Chicken or Tore Ore.

Beef Ribs are a very popular dish in Houston because as the saying goes, you can’t go wrong with BBQ in Texas. Both types of Beef Ribs, back and short, are very popular but short ribs are probably better known. Similar to spare ribs in pork (but larger and with more meat), beef short ribs can be prepared in numerous ways with hundreds of sauce options. Try some today from Stockyard Bar-B-Q.

Okra is a plant that has edible green seed pods. These pods are used to make the delicious Fried Okra dish which is a very common food in the Southern United States. Houston is a great place to try this dish because there are so many different restaurants to try it from. The pods are dredged in seasoned cornmeal and then fried in a pan until golden brown. You can eat these straight or add them to other dishes to add a new and unique taste.