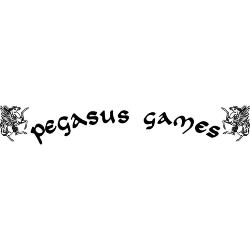 Order from Pegasus Games to enjoy some of the best Tabletop Games in Madison. Looking to find the cheapest way to order Pegasus Games? Choose the most affordable delivery option listed here. Be...show more

Board-and-tile game in which two to four players compete in forming words with lettered tiles on a 225-square board; words spelled out by letters on the tiles interlock like words in a crossword puzzle.

One of the oldest and most popular board games, played by two opponents on a checkered board with specially designed pieces of contrasting colours, commonly white and black. White moves first, after which the players alternate turns in accordance with fixed rules, each player attempting to force the opponent’s principal piece, the King, into checkmate—a position where it is unable to avoid capture.

Picture yourself in the era of discoveries: after a long voyage of great deprivation, your ships have finally reached the coast of an uncharted island. Its name shall be Catan! But you are not the only discoverer. Other fearless seafarers have also landed on the shores of Catan: the race to settle the island has begun!

Introduce your family to three classic games that they are sure to love! This three-in-one set includes interlocking checker pieces and full-sized Staunton Chess pieces with a 2.5" King. It's a perfect keystone for your game collection and a great set for teaching the classics to the next generation of players!

Puzzle photos may vary--Enjoy a 300 piece puzzle! For ages 6+

Puzzle photos may vary--Enjoy a 300 piece puzzle! For ages 6+