Compare delivery offers from restaurants in Memphis. Easily find which delivery service offers the cheapest or quickest delivery from any restaurant.
Enter your address to see the best deals for your area!
Search
Restaurants Available in Memphis
Loading...
FoodBoss
We compare delivery fees from the largest number of restaurants possible. Period. The difference is clear. 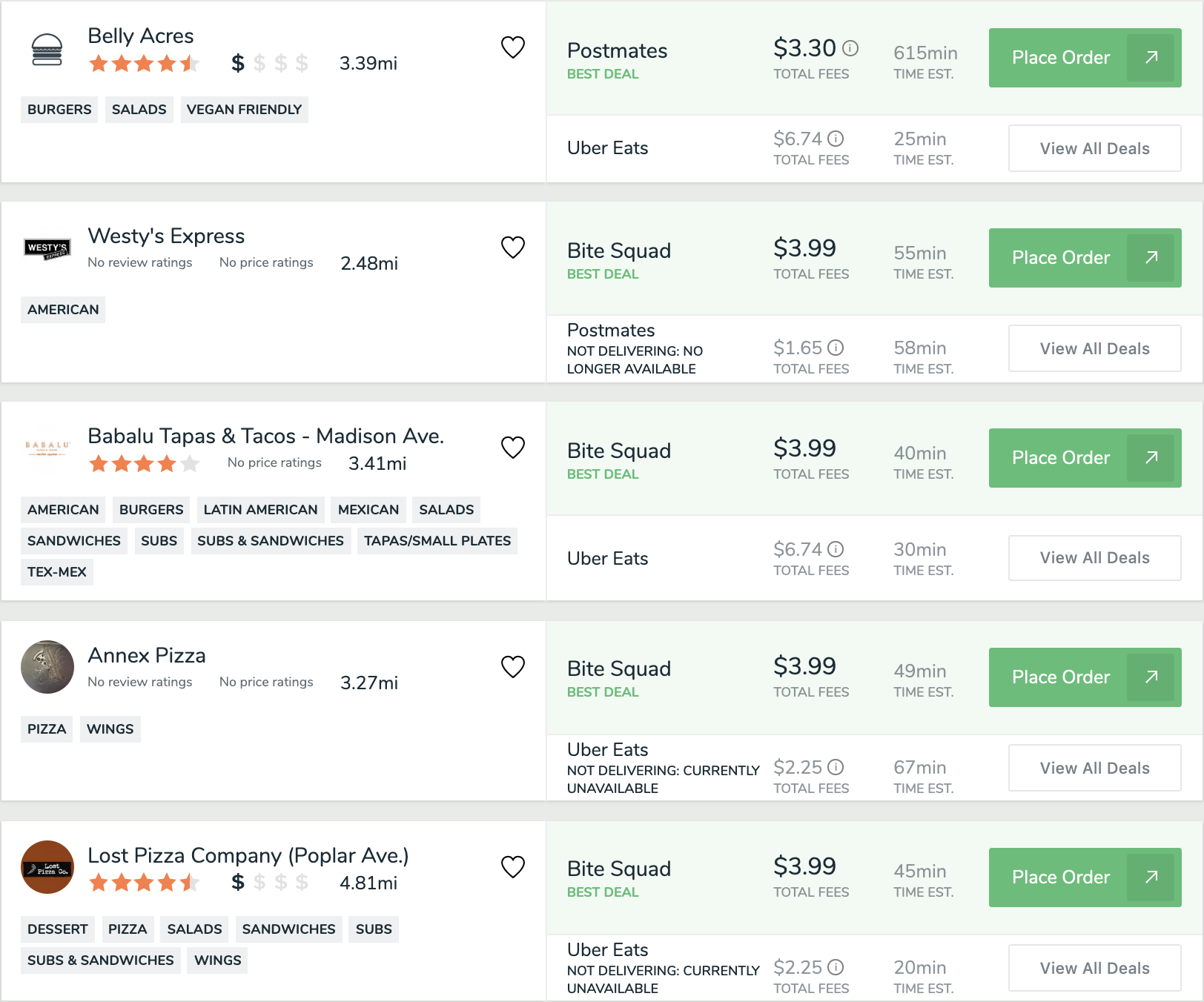 Calculate Your Yearly Savings with FoodBoss!
On average, Users in MEMPHIS save 37% on total fees and get their food 21 minutes faster.
Memphis Food Delivery Guide
On the banks of the Mississippi River and in the far southwest corner of Tennessee sits Memphis. Once home to a large portion of the Southern slave trade, Memphis played a significant role in the Civil Rights Movement. The site of Martin Luther King Jr’s assassination, Memphis is today home of the National Civil Rights Museum. Perhaps best known for its music scene, the city influenced blues music and rock and roll. Like any great city in the South, Memphis is home to tons of great BBQ restaurants, but if you’re looking for a unique dining experience, you’ll easily find it here among the lively streets and bustling downtown.
Memphis Neighborhood Guide

In the core of the city, Midtown is one of the most vibrant and hipster areas of the city. Historic homes are mixed in among attractions like Playhouse on the Square, the Memphis Zoo, and the Children’s Museum of Memphis. You will find many of the best restaurants in Memphis in this area.

Southeast of downtown Memphis, Cooper-Young, named for the intersection of Cooper Street and Young Avenue, is a historic neighborhood in Memphis well known as an artsy area with many unique stores selling anything from vinyl records to craft beer. Art and culture combine in Cooper-Young among various upscale restaurants, live music halls, and happy hour hangouts.

Fried Chicken consists of pieces of chicken that have been either battered, breaded, or floured and then fried. Methods of frying include pan frying and deep frying. The distinct feature of this type of chicken is the crispy outside of the chicken which develops a delicious crust. With many different seasoning options, there are a lot of ways to make great fried chicken. Memphis is a great place to try Fried Chicken because the South is where this American classic first gained notoriety. Try it today from Memphis restaurants offering delivery like Jack Pirtle’s Chicken or Soul Food Express.

Memphis is fairly well known for its BBQ scene, which is why we include BBQ Ribs on this list. The key to great Memphi Style BBQ Ribs is slow cooking the meat. For the final product, BBQ sauce is added to add extra flavor. Try getting this great Memphis dish delivered from restaurants like Arnold’s BBQ or Alfred’s.

Fried Catfish is made by taking long pieces of catfish and deep frying them until they develop a crispy golden brown outer layer. Popular across the entire US, it has become a well known American dish. Try this dish today from local restaurants like Memphis Catfish and Flying Fish.