Compare delivery offers from restaurants in Orlando. Easily find which delivery service offers the cheapest or quickest delivery from any restaurant.
Enter your address to see the best deals for your area!
Search
Restaurants Available in Orlando
Loading...
FoodBoss
We compare delivery fees from the largest number of restaurants possible. Period. The difference is clear. 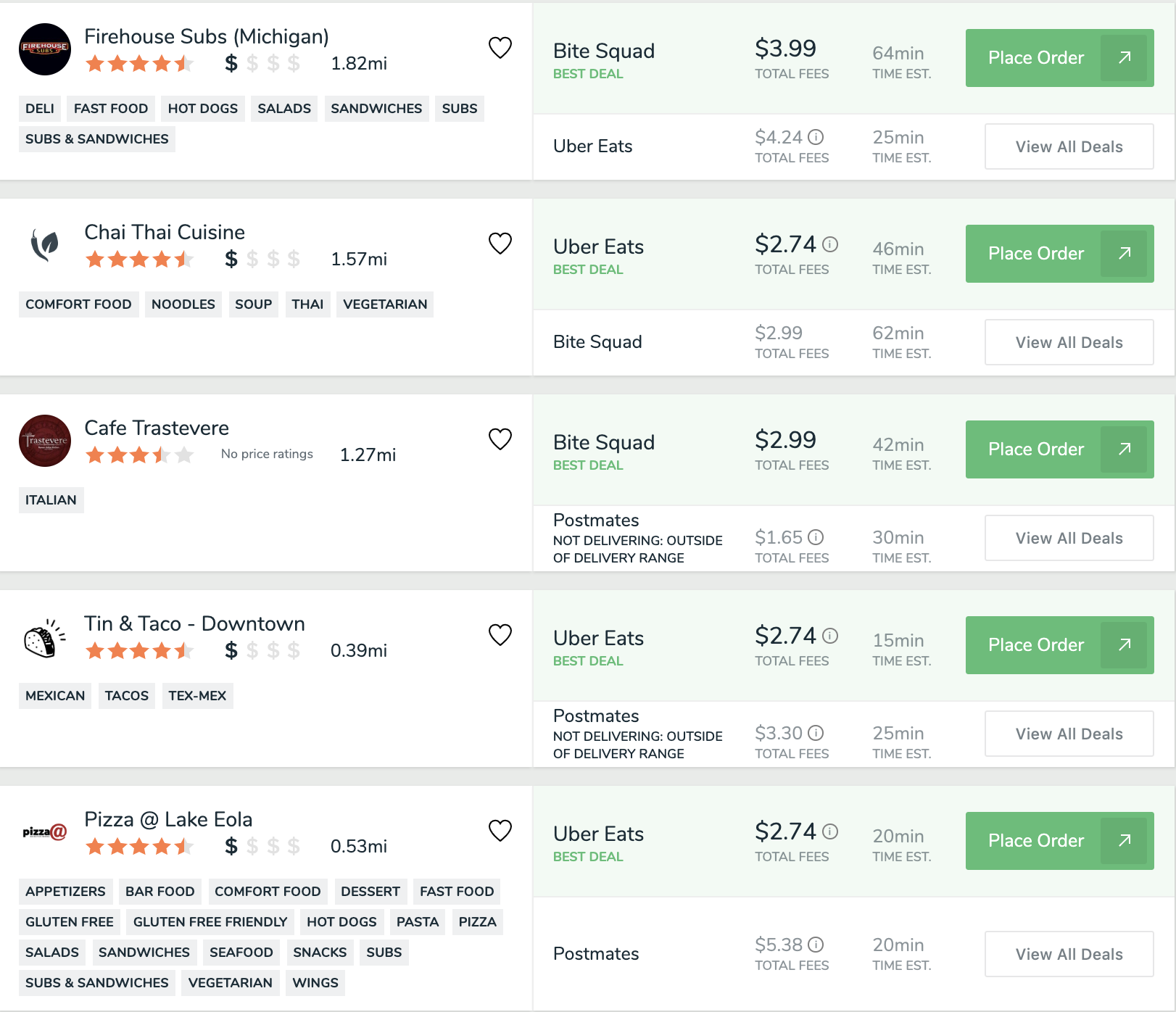 Calculate Your Yearly Savings with FoodBoss!
On average, Users in ORLANDO save 37% on total fees and get their food 21 minutes faster.
Orlando Food Delivery Guide
Located in central Florida and far removed from the coast is the city of Orlando. Most notable for its bustling tourism industry, it is sometimes referred to as the “Theme Park Capital of the World.” The biggest draws for tourists are Walt Disney World and Universal Studios Florida. Many movie studios have locations in Orlando where they can film giving rise to the name, “Hollywood East” for Orlando.
Orlando Neighborhood Guide

Northeast of downtown Orlando and clustered around Corrine Drive is the area known as the Audubon Park Garden District. Vintage shops, book stores, and bars are common in this neighborhood as well as popular restaurants like Blue Bird Bake Shop.

Ivanhoe Village is a historic neighborhood north of downtown Orlando that lies along the shores of Lake Ivanhoe. Notable for its diverse mix of storefronts that include bike shops, jewelry stores, and record shops, there also stands a miniature-sized version of the Statue of Liberty at an intersection near the entrance to the neighborhood.

This dish originated in the Canadian province of Quebec, Poutine is made by slathering gravy on top of crispy french fries and cheese curds. A dish for any diet conscious person to avoid, Poutine has become popular in the Orlando area.

Brisket is one of the most popular cuts of meat for BBQing. Though a much tougher cut than other, it can be easily counteracted. The best method for cooking brisket is definitely to slow cook it which allows the tough tissues in the meat to melt away leaving you a tremendously tender and juicy meal. You can try brisket at almost any Orlando restaurant that specializes in BBQ and we highly recommend you do. Try some today from Cecil's Texas Style Bar-B-Q or Smokey Bones Bar & Fire Grill.

The thought of a fish sandwich for some people might evoke memories of a breaded piece of rubbery fish served to them in their middle school’s cafeteria. Luckily, a fish sandwich can be so much more than that. This is an intentionally broad cuisine item because we couldn’t narrow it down. There is an almost endless number of types of fish sandwiches you can try in Orlando, but we highly recommend you try as many as possible. Order now from Julie’s Waterfront Family Restaurant or Joe’s Crab Shack.