Compare delivery offers from restaurants in Portland. Easily find which delivery service offers the cheapest or quickest delivery from any restaurant.
Enter your address to see the best deals for your area!
Search
Restaurants Available in Portland
Loading...
FoodBoss
We compare delivery fees from the largest number of restaurants possible. Period. The difference is clear. 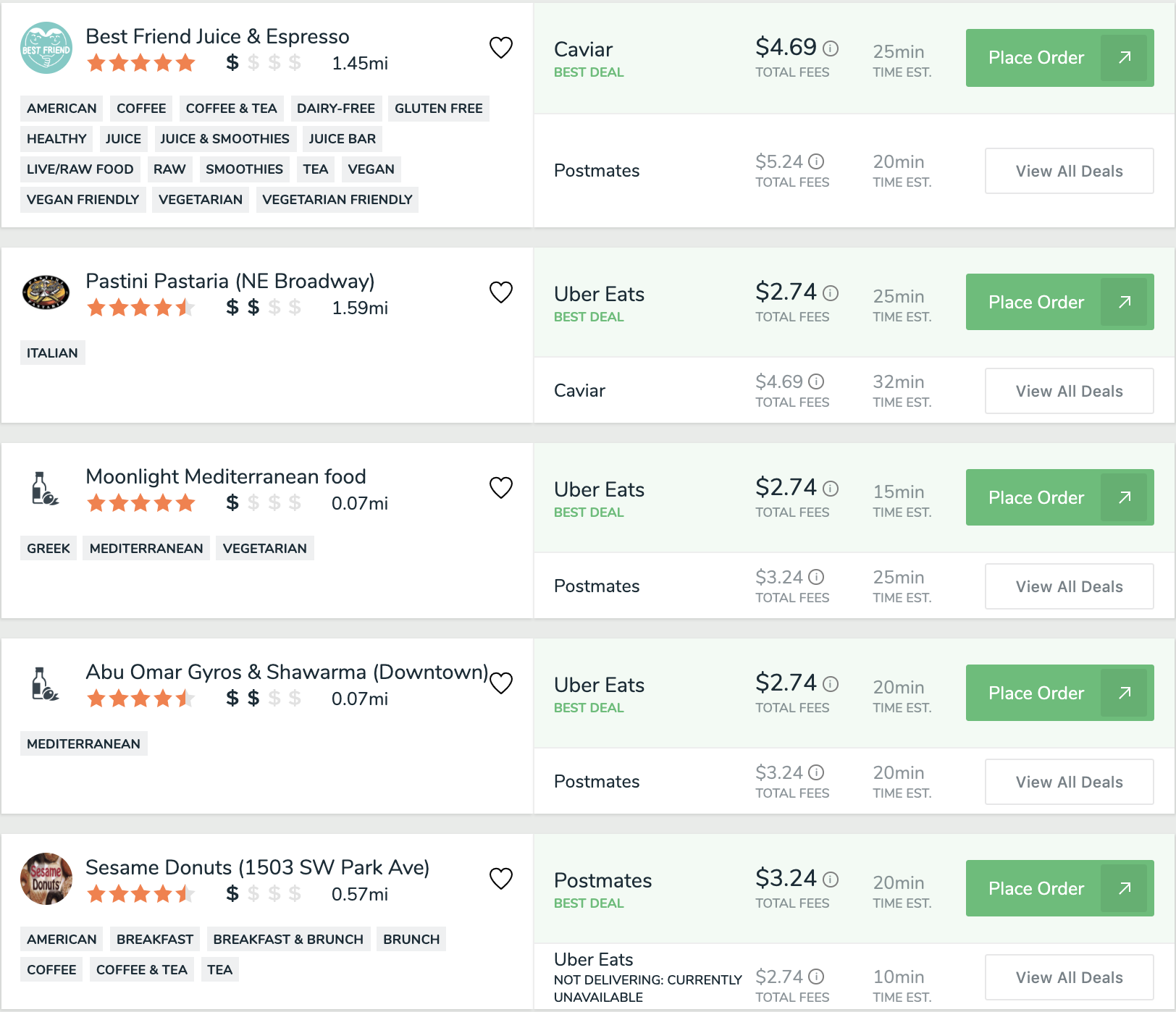 Calculate Your Yearly Savings with FoodBoss!
On average, Users in PORTLAND save 38% on total fees and get their food 22 minutes faster.
Portland Food Delivery Guide
Situated along the Willamette River is the city of Portland. Known as a haven for individuals who are comfortable being different, this city is diverse and inclusive of all. Despite stealing the idea from Austin, Texas, Portland has its own sign that says, “Keep Portland Weird,” which encapsulates the carefree attitude many of Portland’s residents have. Founded along the Oregon Trail route, in its early history, the city was heavily dependent on the timber industry. Today, it is a symbol of the modern counterculture and hipster movement. Portland is well known for having some of the best food trucks or carts in the country, and the food scene is regularly ranked in the top ten nationwide. Coffee and beer are two other significant exports for which Portland has gained a reputation.
Portland Neighborhood Guide

Just west of downtown is the neighborhood of Goose Hollow. In the center of the community is Providence Park, the home of both the Portland Timbers of the MLS and the Portland Thorns FC of the NWSL. Across the street is The Goose Hollow Inn. This neighborhood landmark opened in 1967 and is responsible for revitalizing the use of the Goose Hollow name after it had fallen out of use for many years. Though mainly a residential area, Goose Hollow is a short walk to many of the best restaurants and bars in Portland.

Located across the Willamette River from downtown Portland, Kerns is a neighborhood in east Portland known for great dining. Just across the famous Burnside Bridge, Kerns has seen the emergence of new restaurants that have shifted the center of food culture in Portland across the river to this area. Along 28th Avenue you’ll find many of these great options such as Guero, Navarre, or Paa Dee.

Korean Fried Chicken varies from typical American fried chicken because it is actually fried twice. The benefit of this method is the chicken ends up being less greasy. Seasoning depends on the exact dish, but after the frying is complete, the chicken is layered with sauces such as soy sauce or BBQ sauce. Order Korean Fried Chicken delivery from a couple great Portland restaurants like Meat and Potatoes or Revelry.

There are a multitude of ways to prepare Pork Belly and one example is Fried Pork Belly. Pork belly is the same part of the pig that bacon and pancetta are made from. To make Fried Pork Belly, you deep fry square cut pieces of pork until they are crispy and golden brown. Try it today from restaurants like Pok Pok or Ate-Oh-Ate.

The Marionberry Pie is filled with blackberries that are either whole or in the form of blackberry jam. It requires more sugar in the baking process than other pies, such as apple, because blackberries are much more tart. Have this tasty dessert delivered to your door today from The Pie Spot or Petunia's Pies & Pastries in Portland.