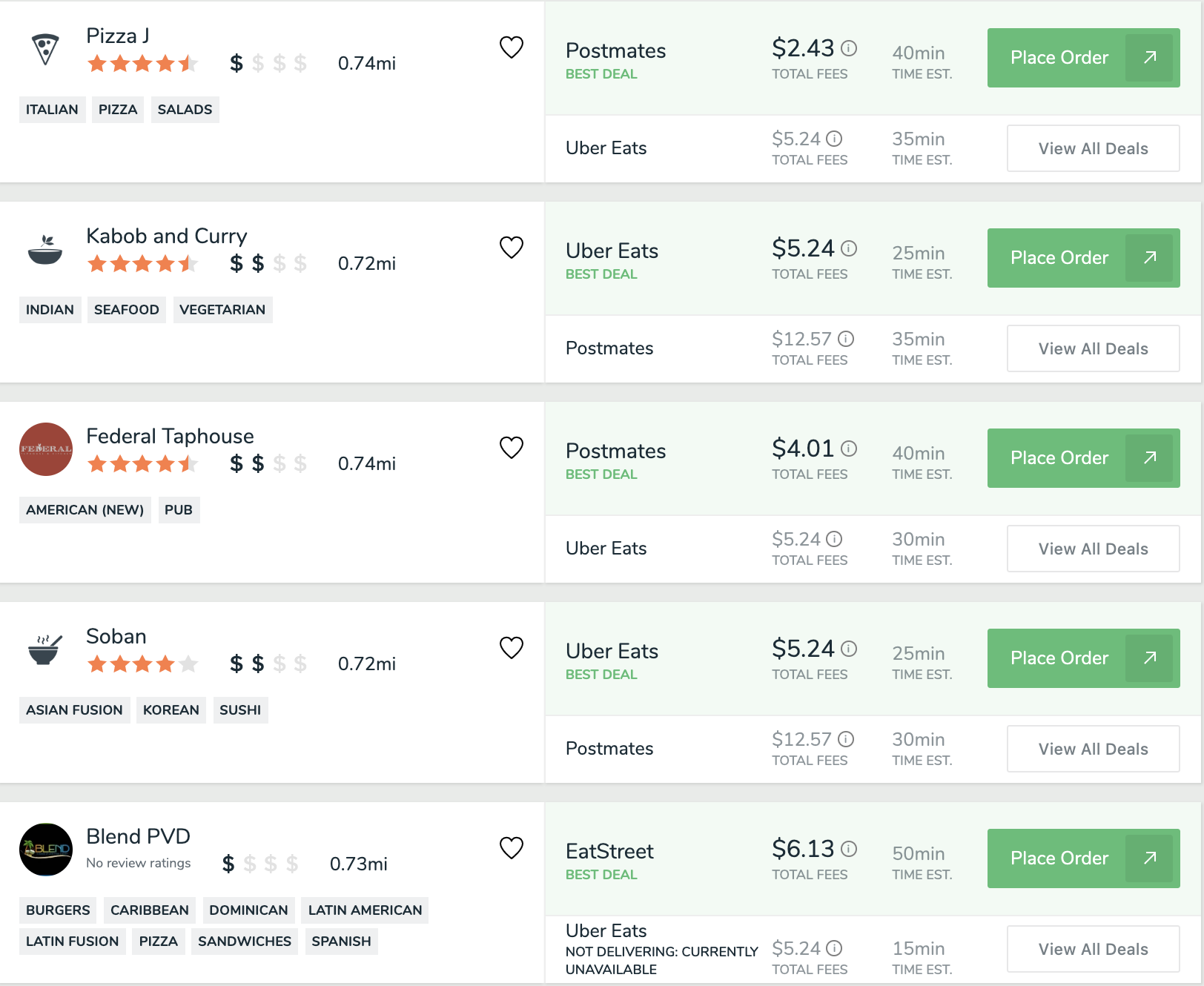 Calculate Your Yearly Savings with FoodBoss!
On average, Users in PROVIDENCE save 40% on total fees and get their food 24 minutes faster.
Providence Food Delivery Guide
Founded in 1636 by exiles from the Massachusetts Bay Colony, Providence is one of the oldest cities in the United States. Situated on the Providence River near Narragansett Bay, Providence is home to Brown University established in 1764. The city is also notable for having the highest number of restaurants per capita of any major city in the country.
Providence Neighborhood Guide

Centrally located in downtown Providence, Federal Hill is an area that has been evolving continuously. Historically, this neighborhood was home to a large Italian-American population, which is why you can still find many great Italian restaurants in the area and is informally known as the city’s Little Italy. On Atwells Avenue, the area’s main street, you will see a unique gateway arch with an Italian sculpture, La Pigna (the pinecone), hanging from the center as a symbol of welcome and abundance. Also on Atwells Avenue, there is a quarter mile stretch on which over 20 restaurants are located, which has only engrained this neighborhood as one of the hubs for dining in Providence.

The location of both Brown University and the Rhode Island School of Design, College Hill is an aptly named neighborhood just east of downtown on the other side of the Providence River. In addition to the standard bar scene near most colleges, Thayer Street, which runs north to south through the neighborhood, is home to many cafes, independent shops, and restaurants. Nearby, the College Hill Historic District marks the location of the original Roger Williams (founder of the Rhode Island colony) home along the river’s shores.

Calamari is the name given to cooked squid dishes common in many cuisines across the globe. There are many different ways to prepare a Calamari dish, but in the US, fried Calamaris is most common. As an appetizer, it is also usually served alongside a dipping sauce of either tartar sauce or marinara sauce. Get Calamari delivered to your door from a couple great seafood restaurants in Providence like Andino’s Pizza and Hemenway’s.

Closely related to a New York Style Pizza, the New Haven Style Pizza is popular along the Connecticut coast as well as in Providence. What makes this type of pizza unique is that it is made even thinner than the New York style and has slight charing around the edges of the crust. Additionally, a true New Haven Style Pizza is not made using mozzarella cheese. In fact, little cheese is included on the pie before it is cooked. Get this type of Pizza delivered to your door right now from restaurants like Providence Coal Fired Pizza or Fellini Pizzeria.

Clams Casino is a Rhode Island original dish that has spread in popularity across the rest of New England. The ingredients, which include the clam itself as well as bacon and commonly green peppers and garlic, are all cooked together. How they are cooked depends on the recipe, but once cooked they are all served in the halfshell of the clam. With parsley sometimes sprinkled on top and lemons served alongside it, this dish is a perfect taste of Providence. Order it today from Hemenway’s.