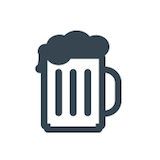 If you're looking for Alcohol restaurants in Brooklyn look no further. Beer Boutique (Union Ave) is known for having some of the best Alcohol in Brooklyn. Located at 497 Union Ave, Beer Boutique ...show more

34oz, 6.5% abv. This route travels along a path of piney American hops, simcoe, cluster, and horizon their natural course coaxed toward spicy by a touch of rye.

34oz, 13.8% abv. Imperial stout a liquid as dark and dense as a black hole with thick foam the color of a bourbon barrel. The nose is an intense mix of charred oak, chocolate, vanilla, caramel and smoke. One sip has more flavor than your average case of beer.

25oz, 7.8% abv. Sour ale was brewed with a substantial portion of rye malt, and the spicy character of the grain asserts itself with clove and pepper in the aroma and flavor. Add in sour cherry notes from special blend of micro-organisms and vanilla from the red wine barrels and you’ve got a mouthful.

25oz, 4.8% abv. Award-winning grisette-style saison, brewed with oats, spelt, buckwheat, and noble hops, it has been aged for months in artisanal american gin barrels. These rare barrels contribute soft oak flavors plus added dimension from botanicals including citrus, juniper, and herbal notes. Complex yet approachable and very easy to enjoy.

25oz, 7.5% abv. Organic farmhouse ale is brewed in small batches on a traditional farm brewery as it has historically been made for hundreds of years. This unfilteredbottle of seizoen, with its beeswax seal, is naturally re-fermented and carbonated with select yeast strains, producing complex fruity and spicy flavors balanced with hops and a soft malt character.

25oz, 9% abv. Belgian strong ale, this is a beer whose fragrance of fresh yeast with a light, flowery rosy touch is especially pleasant. Its flavour, noticed when tasting it, only accentuates the pleasant sensations perceived in the aroma, while revealing a light but pleasant touch of roasted malt. This top fermented trappist beer, refermented in the bottle, is not pasteurized.

22oz, 10% abv. Quadrupel aged in the finest of bourbon barrels, notes of rich, dark fruit, vanilla, and caramel with a burst of tangerine peel culminating in the vibrancy of this full-bodied creations.

12oz, 5.5% abv. Dark baltic porter from carlsbergs Swedish arm, this is the klass III stronger version of the porter first brewed in 1836.

22oz, 11.5% abv. Imperial stout with coffee and vanilla. Fresh roasted coffee beans along with vanilla and cacao nibs have been added to this juggernaut of an imperial stout.

12oz, 5.8% abv. Mixture of several vintages to produce a lambic which is refreshingly fruity.This is the result of blending different lambics of different ages. The second fermentation takes place inside the bottles and therefore they are stored for minimum six months in constant temperature kept cellars.

12oz, 7% abv. Gose brewed based on a high alcohol version of the signature hitachino nest white ale, infused with locally grown green sour plums (ume), and finished with a pinch of japanese sea salt (moshio). The balance of sourness and bitterness comes from the plum and subtle saltiness, the great umami taste of the sea salt is “ ii anbai - just right.

12oz, 6% abv. Original Belgian sour ale from farm-brewery hof ten dormaal. With this beer, the brewery strived to create a special, spontaneously-fermented beer via traditional methods using ambient yeast from the brewery-farm in tildonk. Each batch of zure van tildonk is carefully aged in the cellars of engelburch monastery for several months prior to release.

11oz, 6.2% abv. In contrast to all the others, the orval trappist brewery makes only one beerfor the general public. It has an intensely aromatic and dry character. Between the first and second fermentations there is also an additional dry-hopping process. Through this the beer acquires its pronounced hoppy aroma and extra dry taste.