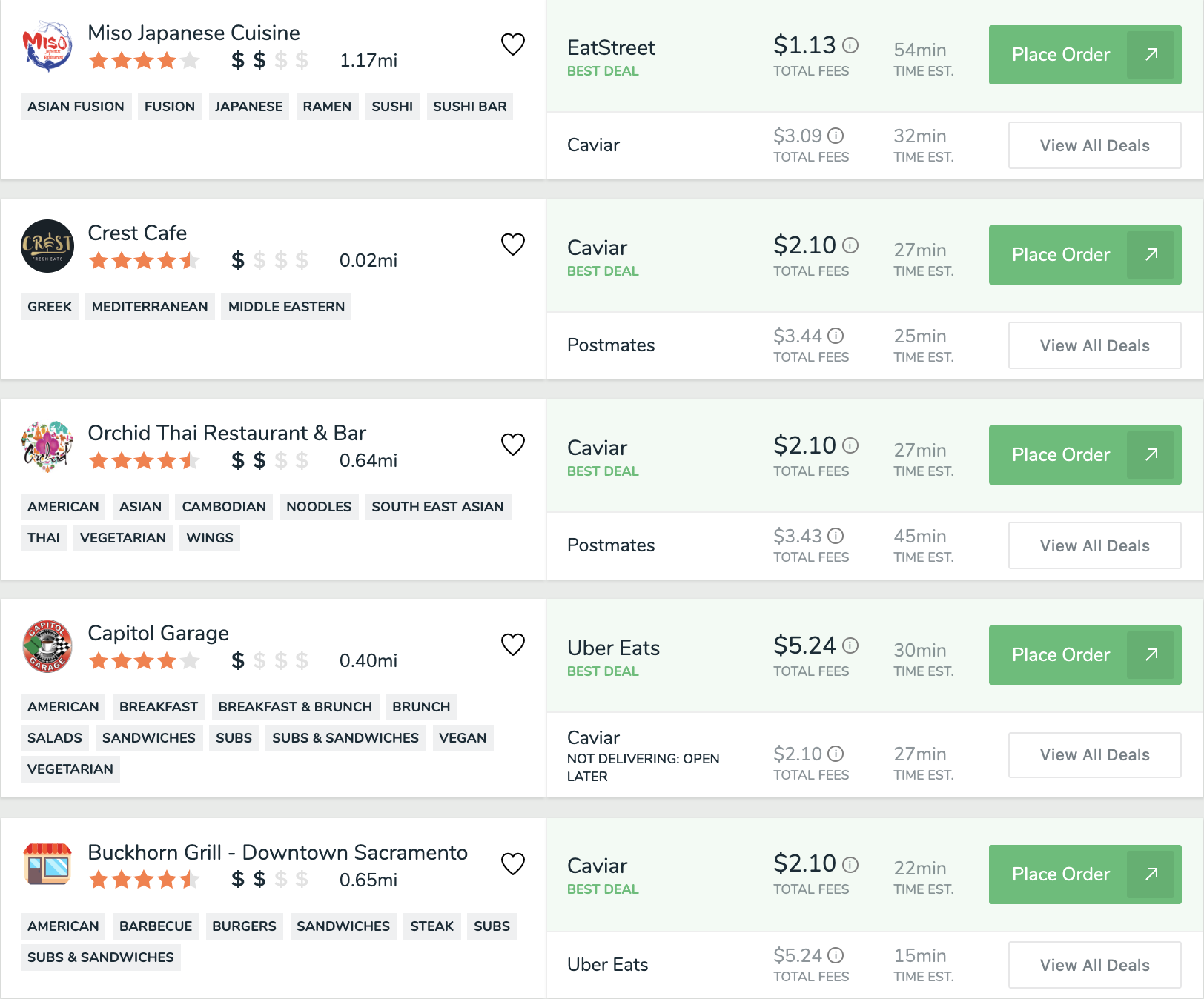 Calculate Your Yearly Savings with FoodBoss!
On average, Users in SACRAMENTO save 40% on total fees and get their food 24 minutes faster.
Sacramento Food Delivery Guide
The capital of California and the sixth largest city in the state, Sacramento is known for its historical and political significance. The city was along the route of the First Transcontinental Railroad and grew during the period surrounding the California Gold Rush when an influx of settlers came to the city and surrounding area. The city is the home of the University of California Davis, the third largest college in the UC system and noted as one of the Public Ivies. Known as one of the most hipster cities in California, Sacramento is also a popular tourist destination for its many museums and culture. The city holds an annual beer festival and is fairly well known as an excellent city for coffee. Sacramento also hosts an annual Farm-to-Fork festival that celebrates the common trend among restaurants in the city sourcing their ingredients locally.
Sacramento Neighborhood Guide

Natomas is a residential neighborhood and community located northwest of downtown Sacramento. One of the few areas surrounding the city that has not been completely developed, within the last 20 to 30 years Natomas has seen a boom in residential construction. Sleep Train Arena, former home to the Sacramento Kings of the NBA, is located in the middle of the neighborhood, but closed in 2016 and has been empty since. The closest community to the Sacramento International Airport, Natomas has many hotels along the route from the airport heading towards downtown.

East Sacramento, otherwise known as East Sac, is an eclectic neighborhood in the city of Sacramento. Within the community, you can find a beautiful Rose Garden inside McKinley Park, popular for wedding photos or those looking to view beautiful flowers. Inside the broader East Sacramento neighborhood lies the Fabulous Forties. A distinct area where many older homes, such as the one Ronald Regan lived in during his tenure as Governor of California, are built, it is a desirable stretch of homes.

Sushi has hundreds of variations and distinct types of dishes. With many options including seafood, there are also many vegetarian options. It may be difficult to decide what type of roll you want with the extensive options available. Order delivery today and sample some of the many different types of Sushi available in Sacramento today from city favorites like Miso Japanese Cuisine.

Ramen is a Japanese dish with many regional variations in its country of origin. Noodles are served in a hot broth that is flavored to desire with ingredients like soy sauce or miso. Additional toppings may be included in the dish such as meat or seaweed. Despite its reputation as a college dorm room essential, Ramen is much more than a cheap calorie filled snack for those on a budget. As its popularity has grown, many Ramen specific restaurants have emerged across the country offering upscale Ramen meals. Try Shoki Ramen House today to experience Ramen culture first hand.

Chicken Curry is an Indian dish. It is made traditionally with pieces of chicken stewed in a sauce that is made from tomatoes, onions, and garlic. The chicken is then cooked in the sauce which allows the meat to marinate and soak up the sauce. Depending on what type of Chicken Curry you order, it may be extremely spicy due to the inclusion of spices like chili peppers and other extra spices. You can get this dish delivered to your door today from Bombay Bar & Grill in Sacramento.