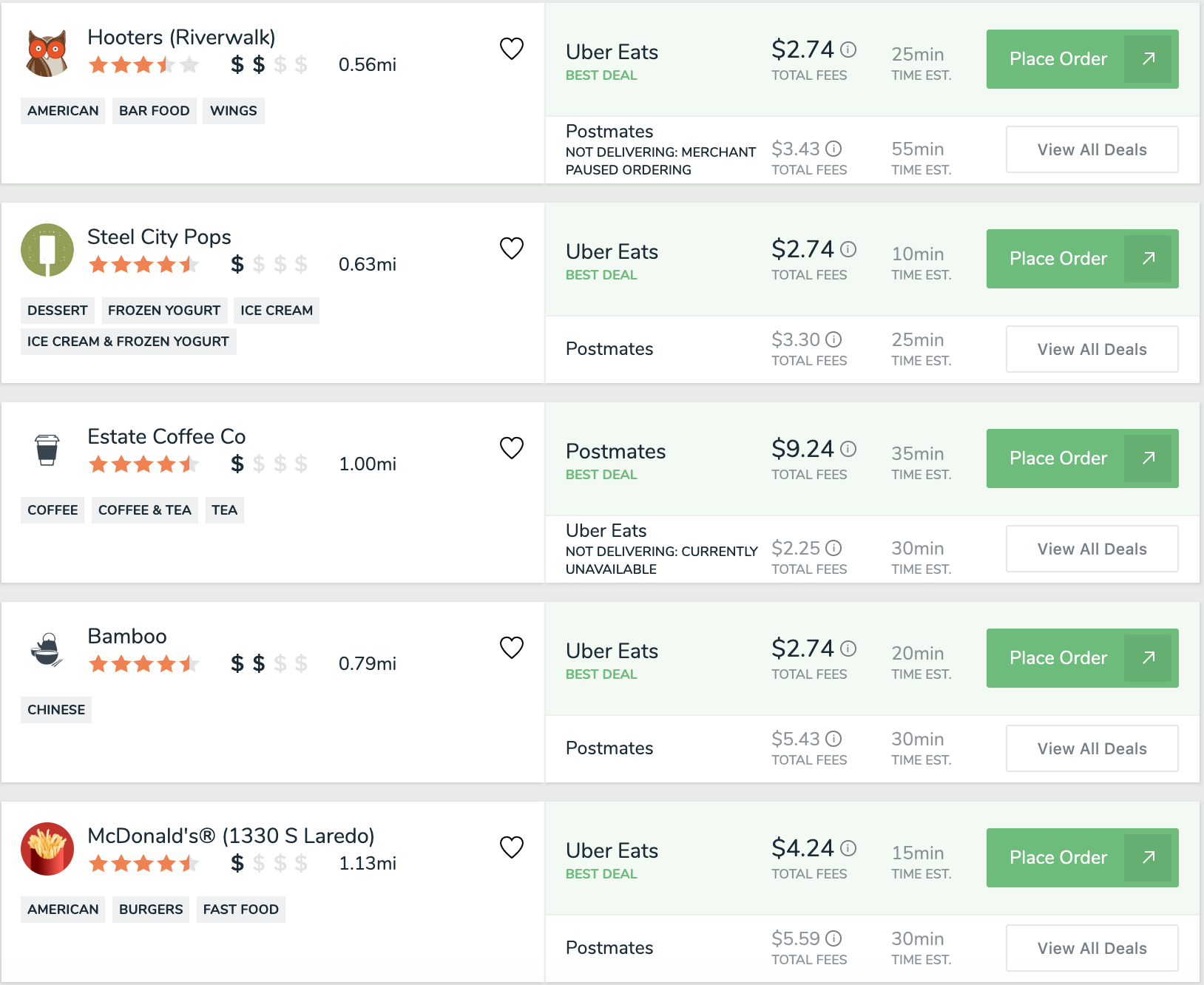 Calculate Your Yearly Savings with FoodBoss!
On average, Users in SAN ANTONIO save 41% on total fees and get their food 25 minutes faster.
San Antonio Food Delivery Guide
Built around the San Antonio River, it is the seventh most populated city in the United States and the second most populated in Texas. San Antonio is notable for its long history under first Spanish, and then Mexican colonial rule before Texas won its independence before joining the United States. Rich cultural attractions like the Alamo, the River Walk, Mission Espada, and the Cathedral of San Fernando are located all across the city. Home of the San Antonio Spurs, the city to this day has deep roots that trace themselves to the city’s former colonial past. Authentic Mexican and Tex-Mex cuisine are favorites in the city as well as standard BBQ.
San Antonio Neighborhood Guide

North of the city core, Tobin Hill is a residential neighborhood in San Antonio that was initially used as agricultural land by early settlers. In the late 19th century, members of the Tobin family began to build houses in the area, thus giving rise to the neighborhoods name. San Antonio College is located in the west side of Tobin Hill as well as the Metropolitan Methodist Hospital. The neighborhood’s main draw is the newly built Pearl Brewery complex. In addition to a brewery, the area draws visitors to its many restaurants, bars, and boutique shops.

Situated just south of the River Walk, La Villita is a historical and cultural hub in the heart of downtown San Antonio. One of the city’s first settled neighborhoods, La Villita Historic Arts Village is the main attraction in the community where you can find a great artists market where local artisans sell their crafts, souvenirs, textiles, sculptures, gifts, or jewelry. Located just steps from San Antonio’s major attractions such as the Alamo and The Magik Theatre, you will also find a wide range of cuisine options ranging from authentic Mexican dishes to Texas BBQ both in the neighborhood and within a short walk.

Puffy Tacos are a San Antonio special. What makes this tacos unique is how the taco shell winds up looking a little puffy after it has been fried. Hence the dish’s name. One the taco shell is cooked, you typically add taco meat, shredded lettuce, tomatoes, and cheese to create this interesting looking take on tacos. Try a Puffy Taco next time your in San Antonio with delivery from Henry’s Puffy Tacos.

A popular dish across the state of Texas, you can try this dish in many San Antonio restaurants. This dish is prepared by coating a beefsteak with seasoned flour and then pan frying it until it is golden and crispy, like fried chicken. A popular addition to the piece of meat is a thick coating of gravy served on top. Once cooked, the piece of meat closely resembles the Austrian wiener schnitzel. Get one delivered from San Antonio restaurants including Alamo Cafe or Two Step Restaurant and Cantina.

Pozole is a traditional Mexican soup that has found popularity in this Texas city. It is made with dried maize kernels, called hominy, and meat, most typically pork. Additional seasoning can be added and there are three main variations of this dish: white, green, and red. This dish is historically eaten at celebratory times of the year, but that doesn't mean you can't enjoy it from one of your favorite San Antonio restaurants today. Order it online for delivery from places like Cascabel Mexican Patio or Paloma Blanca Mexican Cuisine.