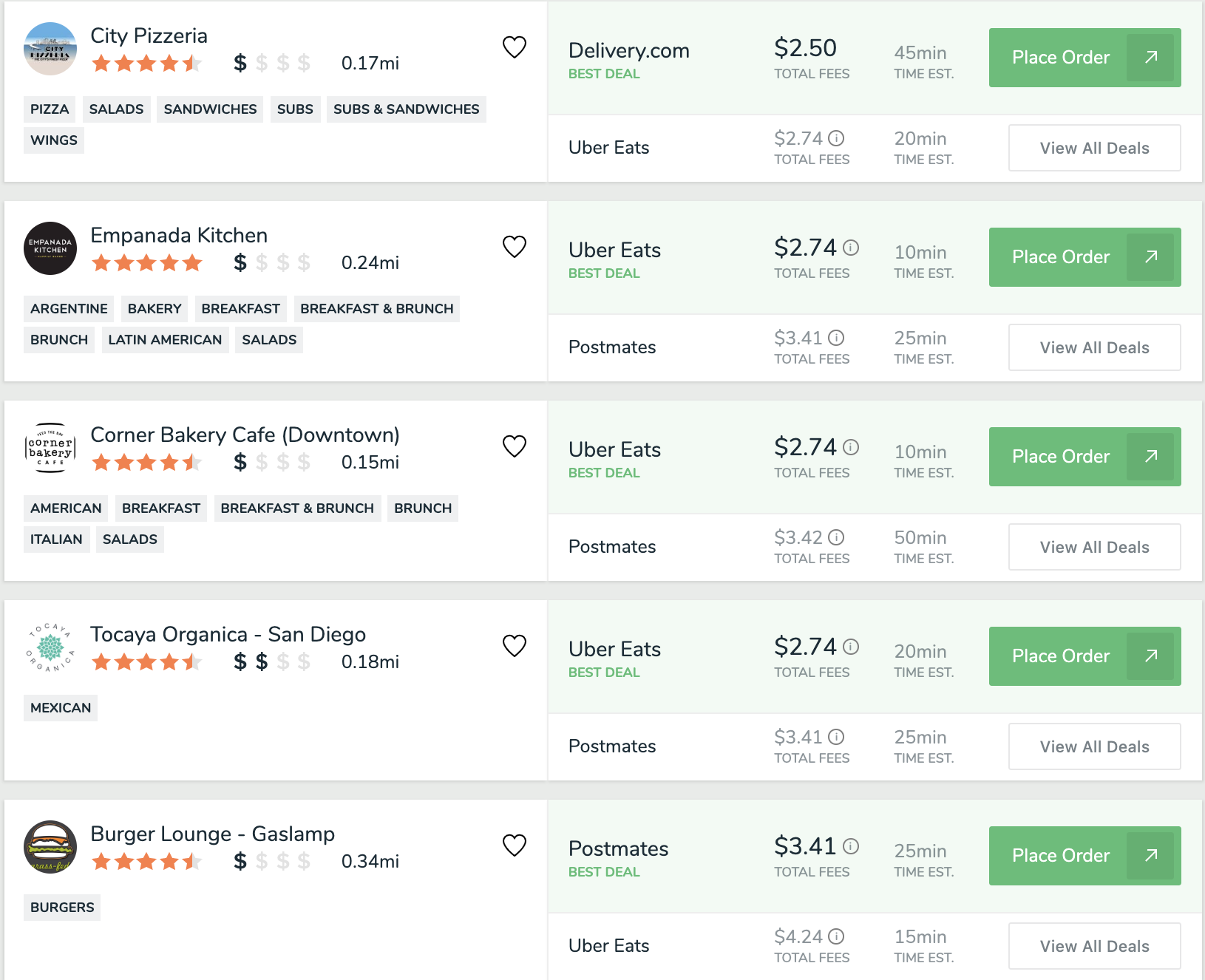 Calculate Your Yearly Savings with FoodBoss!
On average, Users in SAN DIEGO save 39% on total fees and get their food 23 minutes faster.
San Diego Food Delivery Guide
Situated at the southernmost part of the state of California and adjacent to Mexico, San Diego was founded in 1769 due to the existence of the naturally deep harbor now known as San Diego Harbor. First ruled by Spain, the area that today comprises San Diego was next ruled by Mexico after they gained their independence from Spain. Mexico ruled the area until the Mexican-American War after which all of California was ceded to the United States from Mexico. A popular tourist destination due to its naturally beautiful beaches and active nightlife, San Diego is also home to a highly regarded food scene where different cultures cuisines are fused into original creations.
San Diego Neighborhood Guide

North of downtown San Diego and located right on the ocean is the Pacific Beach neighborhood. A popular tourist location due to the great beaches in the area, along Mission Boulevard that runs parallel to the beach you will find many of the neighborhoods most popular clubs, bars, and restaurants. Boutique shopping and yoga studios fill the streets of Pacific Beach and situated across Mission Bay is SeaWorld San Diego, a popular destination for families on vacation.

San Diego’s entertainment hub, the Gaslamp Quarter is known for its mix of nightlife including bars, clubs, and restaurants as well as live music venues, all packed tightly into this small neighborhood mainly along Fifth Avenue. Located right in the center of downtown San Diego, you can get to the area from almost anywhere easily and within walking distance of Gaslamp is the House of Blues and Petco Park, home of the Padres. Great restaurants are in no short supply here with many world-renowned chefs operating independent restaurants in the area.

Baja Fish Tacos are tortillas loaded up with crispy pieces of fried chicken, lettuce, pico de gallo, and a fish taco sauce. Lime juice is also squeezed on top of each. In San Diego, these are a great seafood option. Order fish tacos for delivery from some great restaurants in San Diego such as Lalo’s Tacos or Ray’s Mexican Restaurant.

An Enchilada is a corn tortilla rolled around a filling and sometimes covered in a chili pepper sauce. Originally from Mexico, this dish has become wildly popular across the American Southwest as well as Southern California. Usually filled with various meats, cheese, beans, and vegetables, this dish is extremely popular in San Diego. Order from restaurants including Alamilla’s Mexican Food or Cotijas in San Diego.

This type of burrito is a classic Cal-Mex dish. Ingredients often include carne asada, guacamole, pico de gallo, and cheese all piled into a flour tortilla. Try it today in San Diego with delivery from Sombrero Mexican Food or La Posta De Acapulco's.