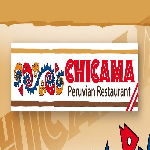 Seasoned ground beef stuffed inside a ball of potatoes.

Deep fry pastry with the choice of beef, chicken or cheese stuffing.

Lettuce, tomatoes, and cucumbers. Tossed in a fresh lime citronette.

Lettuce, cucumbers, tomatoes, and avocado tossed in a Italian dressing.

Made from thick freshwater shrimp, potatoes, milk, and rice.

A traditional cilantro based chicken soup with rice and vegetables.

Boiled pork with seasonings and spices, and then fried in its own fat. Served with a relish made of red onions, lime juice, and fried sweet potatoes.

A mix of fried rice with green onions, eggs, ginger, chicken or beef slices, and shrimp fried with soy sauce.

Steak or chicken, topped with sauteed onions, and tomatoes. Accompanied by steamed rice and white beans.

This is a shredded chicken dish in a spicy sauce flavored with cheese, garlic, and Peruvian chili peppers.

Chicken and quinoa simmered in a spicy chili and garlic sauce. Served with steamed rice.

Chicken strip and bite-size yucca simmered in a cilantro and garlic sauce accompanied with steam rice.

Peruvian style sauteed vegetables and spaghetti in a pesto sauce.

Spicy garlic spaghetti with calamari, fish, and shrimp with a touch of white wine.

Sauteed shrimp and marinated in garlic sauce. Served with white rice and salad.

Teamed shrimp cooked with onions tomatoes and a touch of beer. Served with steamed rice and slices of potatoes.

Marinated fish in a Peruvian sauce steamed with tomatoes and onions with a touch of beer. Served with steamed rice and slices of potatoes.