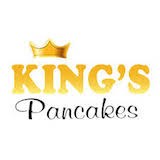 Made with egg whites and filled with tomatoes, spinach, mushrooms, onions, Swiss cheese and topped with avocado.

Eggs, cheese, salsa on top of tortilla. Side of beans and hash browns. choice of additional tortillas or three pancakes.

Mozzarella sticks (five pieces) and with a side of marinara sauce.

Battered steak with gravy on top, broccoli and garlic bread with choice of soup or side salad.

Six ounces. Sirloin served with mashed potatoes, veggies with herb butter, garlic bread and choice of soup or side salad.

Sirloin steak cubes, mushrooms and onions. Served with corn, mashed potatoes and garlic bread as well as choice of soup or side salad.

Fried chicken (4), corns, mashed potatoes , brown gravy and garlic bread as well as choice of soup or side salad.

Grilled chicken and broccoli with alfredo sauce and parmesan cheese with choice of soup or side salad.

French toast with banana and strawberry topping with whipped cream.

Four crepes with banana and nutella on top.

Two crepes filled with cream cheese and topped with choice of strawberry or blueberry topping.

Three crepes filled with cheese with choice of strawberry or blueberry topping with sour cream on top.

Soup and half sandwich combo. Choose one of the following: half turkey, half blt or half breakfast sandwich

Flour tortilla filled with bacon, eggs, ham cheddar cheese and topped with pepper jack cheese and avocado. Side of home potatoes and salsa.

Served with rice and beans choice of two pancakes or tortillas.

Two eggs, chorizo, Jack and cheddar cheeses wrapped in corn tortillas. Topped with serrano peppers and cilantro. Comes with a side of home style potatoes topped with hollandaise sauce.

One pancake with banana's strawberries, whipped cream and a yogurt.

One egg, one bacon strip, one sausage link and one regular pancake with choice of banana, blueberry, strawberry or peach fruit topping.

Macaroni and cheese with side of fruit.

Grilled cheese with side of fruit or fries.

Beef burger with American cheese with side of fries or fruit.

One cupcake pancake topped with whipped cream and sprinkles. Comes with one egg and one strip of bacon or one sausage link.

Two slices of French toast, with two strips of bacon or sausage.

Gravy over braised beef with corn, mashed potatoes and bread.

One each of sausage, bacon, egg, ham, pancake with hash browns.

One piece of grilled tilapia served with a side of broccoli, home style potatoes and garlic bread.

Choose between regular or decaf.

Choose between strawberry or mango.

Choose from vanilla, strawberry or chocolate.