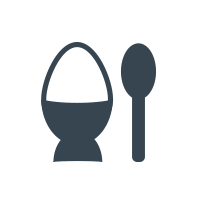 With hash browns and toast.

One egg, two link sausage, one slice of French toast.

Three dollar pancakes. One egg fried in butter. One slice of Bacon.

One egg. Two strips of bacon. 1/2 hash browns, one slice of toast.

For the undecided buttermilk, buckwheat, potato and strawberry pancakes.

Deliciously flavored with a secret recipe served with sour cream

Made with real ripe bananas and coconut syrup.

Light and fluffy. Served with whipped butter and choice of syrup.

3 link sausages. Individually rolled in a pancake and topped with our own apple glaze.