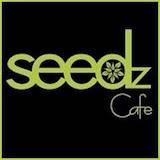 Order online delivery from Seedz Cafe to enjoy some of the best snacks in Clayton. Looking to find the cheapest way to order Seedz Cafe? Choose the most affordable, or the quickest delivery optio...show more

Raw zucchini noodles tossed in a garlic jalapeno peanut sauce with carrot, green onion, and bean sprouts, served on a bed of spinach, topped with peanuts and pea sprouts.

Thinly sliced golden beets stuffed with a walnut pesto, served on a bed of greens topped with ramesan and sprouts.

Raw zucchini noodles tossed with a cashew cream and pesto served on a bed of spinach and topped with sun dried tomatoes.

Brown rice and fresh organic veggies wrapped in nori served with ginger jalapeno on side with house made special sauce.

The sweetness of apple cutting the edge of bitter greens and the bite of celery.

Made from lemons juiced whole, the tartness delicately muted with agave. When life gives you lemons, squeeze them.