Compare delivery offers from restaurants in Tampa. Easily find which delivery service offers the cheapest or quickest delivery from any restaurant.
Enter your address to see the best deals for your area!
Search
Restaurants Available in Tampa
Loading...
FoodBoss
We compare delivery fees from the largest number of restaurants possible. Period. The difference is clear. 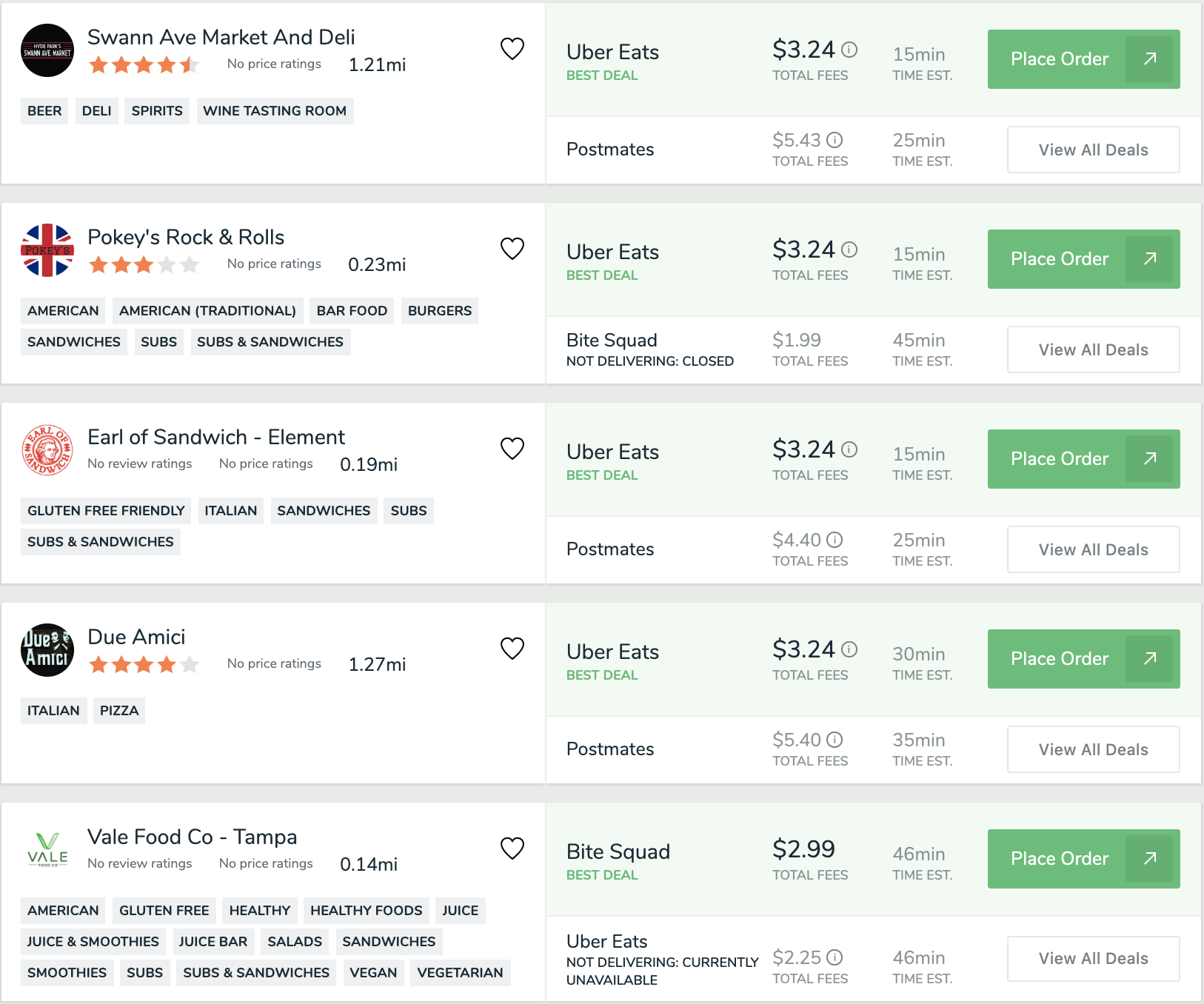 Calculate Your Yearly Savings with FoodBoss!
On average, Users in TAMPA save 35% on total fees and get their food 19 minutes faster.
Tampa Food Delivery Guide
Tampa is the largest city on Florida’s west coast along the Gulf of Mexico. The city was built next to what is today known as Tampa Bay. In addition to shipping, tourism, professional sports, finance, and healthcare are all main components of the Tampa economy. The cuisine of the city is inspired by immigrants from Cuba, Italy, Venezuela, Puerto Rico, and Vietnam. Floribbean cuisine is probably the most unique cuisine type Tampa has to offer, and many restaurants specialize in menus that fuse the culinary features of multiple cultures to create new and exciting dishes.
Tampa Neighborhood Guide

Southwest of downtown Tampa, Hyde Park is a historic neighborhood with upscale shopping and great residential areas. The University of Tampa is just north of Hyde Park, and the community includes the smaller neighborhoods of SoHo and Hyde Park Village. Hyde Park Village has great open-air malls with many upscale stores and boutiques. Nearby, SoHo has attractive architecture and many nightlife options.

In the heart of Tampa, the Channel District neighborhood is home to many of the biggest attractions in the city. Within the area  lies The Florida Aquarium, Amalie Arena (home of the Tampa Bay Lightning), the American Victory Museum, and Port Tampa Bay, where cruise ship passengers embark on their journeys. Restaurants in this area are mostly casual eateries catering to tourists and sports fans alike.

Shrimp and grits is a uniquely Southern dish. More specifically, it originated from the South Carolina coast. However, you can find some great restaurants serving up this American dish in Tampa. Whether this is a breakfast, lunch, or dinner dish is apparently still up for debate, but no matter when you try it, it will be no less delicious. Try it from Roux or Mr. B’s Cafe with delivery today.

Grouper is a white meat fish used to make this type of sandwich popular in Florida. It is also a fairly sturdy fillet so there are various methods you can use to cook it: Blackened, fried, grilled, baked or broiled. Blackened (not burnt), is a popular variation whereby a generous amount of spices are added, such as paprika and black pepper, and then the fish is seared until a crust is formed. Add a buttery bun and any toppings you see fit and you’ll no doubt enjoy this Tampa favorite. Delivery from Blue Sea Fish or Tampa Bay Brewing Company is available for this sandwich.

Just a few years ago this sandwich was designated “the signature sandwich of the city of Tampa” so you know there are a plethora of great options around the city. This is essentially a variation on the classic ham and cheese sandwich popularized by Cuban factory workers in Florida. The sandwich is made with ham, roast pork, pickles, mustard, and cheese served on Cuban bread. The Tampa version also typically includes salami due to the large Italian population present in Ybor City when/where the sandwich first gained popularity in Tampa. Get it delivered and try it today from West Tampa Sandwich Shop or La Teresita Cafe.