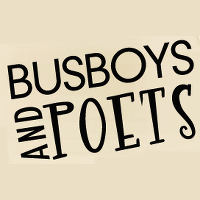 If you find yourself in Washington and hungry, but need vegan friendly options, then it's time to order from Busboys and Poets - 450K. Choose the most affordable delivery option listed on this pa...show more

3 beef sliders, shredded lettuce, tomato and chipotle mayo served with your choice of side.

8 oz grilled salmon fillet cooked medium well with lemon butter sauce, wild rice, and asparagus topped with corn salsa (Gluten-Free Friendly). Allergies: Dairy (butter sauce), Cooked White Wine, Shallots, Garlic. One of our most popular dishes. Can be made without the sauce to be dairy-free.

4.5 Oz of Crab Cake with LTO on Brioche Bun with Old Bay tartar sauce on the side Crab Cake is not Gluten Free! Allergies : Gluten, Seafood, Dairy

2 Beef sliders served with shredded lettuce, tomato and chipotle mayo with your choice of kid's side and kid's drink.

Grilled cheese, with your choice of kid's side and kid's drink. (Vegetarian).

Grilled chicken breast with your choice of kid's side and kid's drink. (Gluten-Free Friendly).

3 organic, free-range eggs, mushrooms, onion, cheddar cheese, ham and a choice of side.

3 organic, free-range eggs, mushrooms, onion, cheddar cheese, ham and a choice of side.

2 Beef sliders served with cheddar and chipotle mayo with your choice of kid's side and kid's drink.

Grilled cheese, with your choice of kid's side and kid's drink. (Vegetarian).

Grilled chicken breast with your choice of kid's side and kid's drink. (Gluten-Free Friendly).

Create your own flatbread pizza from scratch.

Vegan mozzarella with vegan pepperoni on a vegan flatbread. Your choice of sauce.

Served in a glass bottle. Must be ordered with prepared food and 21 or older to purchase. Only available in the District of Columbia.

Vodka, tomatoes, lime juice, horseradish, black pepper, celery seed. Must be ordered with prepared food and 21 or older to purchase.

Bourbon, fresh lime juice, ginger beer. Must be ordered with prepared food and 21 or older to purchase.

Tequila, triple sec, orange juice, margarita mix. Must be ordered with prepared food and 21 or older to purchase.

Freshly squeezed orange juice, sparkling wine. Must be ordered with prepared food and 21 or older to purchase.

White Rum, Mint Leaves, Lime Wedges, Orange Slice, Agave, and Soda Water. Must be ordered with prepared food and 21 or older to purchase.

Los Vecinos Del Campo Mezcal, triple sec, guava puree, and lime juice. Must be ordered with prepared food and 21 or older to purchase.

Bourbon, lemon juice, honey syrup and muddled blueberries. Must be ordered with prepared food and 21 or older to purchase.

Bourbon, fresh lime juice, ginger beer. Serves 4-6 people. Must be ordered with prepared food and 21 or older to purchase.

Tequila, triple sec, orange juice, margarita mix. Serves 4-6 people. Must be ordered with prepared food and 21 or older to purchase.

Freshly squeezed orange juice, sparkling wine. Serves 4-6 people. Must be ordered with prepared food and 21 or older to purchase.

Bourbon blend, lemon juice, honey syrup and muddled blueberries. Serves 4-6 people. Must be ordered with prepared food and 21 or older to purchase.

Winery: Dante Region: California Vintage: 2017 Vegan and Sustainable Tasting notes: Cherry and spice with soft tannins and hints of vanilla. Must be ordered with prepared food and 21 or older to purchase.

Winery: Santa Julia Reserva "Mountain Blend" Region: Argentina Vintage: 2017. Vegan and Sustainable. Tasting notes: Plum and blueberries with hints of black pepper and vanilla. Must be ordered with prepared food and 21 or older to purchase.

Winery: La Flor Region: Argentina Vintage: 2017 Sustainable. Tasting notes: Ripe blackberry, plum, and hints of cinnamon and tarragon. Must be ordered with prepared food and 21 or older to purchase

Winery: Villa Wolf Region: Germany Vintage: 2018 Vegan and Sustainable. Tasting notes: Apricot, spices, hints of citrus, and a touch of sweetness. Must be ordered with prepared food and 21 or older to purchase.

From the National Book Award-winning author Ibram X. Kendi comes a refreshing approach that will radically reorient America on the urgent issues of race, justice, and equality. Ibram X. Kendi's concept of antiracism reenergizes and reshapes the conversation about racial justice in America--but even more fundamentally, points us toward liberating new ways of thinking about ourselves and each other.

From the National Book Award-winning author of How to Be an Antiracist comes a fresh new board book that empowers parents and children to uproot racism in our society and in ourselves. With bold art and thoughtful yet playful text, Antiracist Baby introduces the youngest readers and the grown-ups in their lives to the concept and power of antiracism. Antiracist Baby is the perfect gift for readers of all ages dedicated to forming a just society.

The Room Where It Happened by John Bolton
$32.50

As President Trump’s National Security Advisor, John Bolton spent many of his 453 days in the room where it happened, and the facts speak for themselves. The result is a White House memoir that is the most comprehensive and substantial account of the Trump Administration, and one of the few to date by a top-level official. With almost daily access to the President, John Bolton has produced a precise rendering of his days in and around the Oval Office.

Children of Virtue and Vengeance by Tomi Adeyemi
$19.99

Children of Virtue and Vengeance is the stunning sequel to Tomi Adeyemi's New York Times-bestselling debut Children of Blood and Bone, the first book in her Legacy of Orïsha trilogy.

AN OPRAH’S BOOK CLUB PICK A boldly imagined work of magic and adventure from the National Book Award-winning author of Between the World and Me.

Girl, Woman, Other by Bernardine Evaristo
$17.00

Girl, Woman, Other is a magnificent portrayal of the intersections of identity and a moving and hopeful story of an interconnected group of Black British women that paints a vivid portrait of the state of contemporary Britain and looks back to the legacy of Britain’s colonial history in Africa and the Caribbean.

From the author of the classic Their Eyes Were Watching God comes a landmark publication of the American experience, now in paperback.

Prince The Beautiful Ones by Prince
$30.00

The brilliant coming-of-age-and-into-superstardom story of one of the greatest artists of all time, in his own words—featuring never-before-seen photos, original scrapbooks and lyric sheets, and the exquisite memoir he began writing before his tragic death.

The Ballad of Songbirds and Snakes by Suzanne Collins
$27.99

The Ballad of Songbirds and Snakes is a dystopian action-adventure novel by American author Suzanne Collins. It is a spinoff and a prequel to The Hunger Games trilogy.

From Academy Award–winning actress Lupita Nyong’o comes a powerful, moving picture book about colorism, self-esteem, and learning that true beauty comes from within.

Bridget Jones’s Diary meets Americanah in this disarmingly honest, boldly political, and truly inclusive novel that will speak to anyone who has gone looking for love and found something very different in its place. Queenie Jenkins is a twenty-five-year-old Jamaican British woman living in London, straddling two cultures and slotting neatly into neither.

The Mirror and the Light by Hilary Mantel
$30.00

“If you cannot speak truth at a beheading, when can you speak it?” With The Mirror & the Light, Hilary Mantel traces the final years of Thomas Cromwell, the boy from nowhere who climbs to the heights of power, offering a defining portrait of predator and prey, of a ferocious contest between present and past, between royal will and a common man’s vision: of a modern nation making itself through conflict, passion and courage.

Influenced by the mysterious place gingerbread holds in classic children’s stories, beloved novelist Helen Oyeyemi invites readers into a delightful tale of a surprising family legacy, in which the inheritance is a recipe.

"Sally Rooney's books that bring a 21st century perspective on insecurity to the coming-of-age narrative. Normal People is a compulsive, psychologically astute will-they-or-won't-they love story involving two of the most sympathetic people you're liable to meet between covers. Although hailed as a voice of millennials, Rooney offers plenty to appeal to readers across genders and generations." - Heller McAlpin

Source of Self Regard by Toni Morrison
$16.95

A rich gathering of Toni Morrison's most important essays and speeches, spanning four decades. These pages give us her searing prayer for the dead of 9/11, her Nobel lecture on the power of language, her searching meditation on Martin Luther King Jr., her heart-wrenching eulogy for James Baldwin. She looks deeply into the fault lines of culture and freedom: the foreigner, female empowerment, the press, money, “black matter(s),” human rights, the artist in society, the Afro-American presence in American literature.

Say Nothing by Patrick Radden Keefe
$16.95

From award-winning New Yorker staff writer Patrick Radden Keefe, a stunning, intricate narrative about a notorious killing in Northern Ireland and its devastating repercussions. In December 1972, Jean McConville, a thirty-eight-year-old mother of ten, was dragged from her Belfast home by masked intruders, her children clinging to her legs. They never saw her again.

If your anxiety about global warming is dominated by fears of sea-level rise, you are barely scratching the surface of what terrors are possible—food shortages, refugee emergencies, climate wars and economic devastation. The Uninhabitable Earth is also an impassioned call to action. For just as the world was brought to the brink of catastrophe within the span of a lifetime, the responsibility to avoid it now belongs to a single generation—today’s.

When mommy is away, it’s up to daddy to do his daughter’s hair in this ode to self-confidence and the love between fathers and daughters from former NFL wide receiver Matthew A. Cherry and New York Times bestseller Vashti Harrison. Tender and empowering, Hair Love is an ode to loving your natural hair—and a celebration of daddies and daughters everywhere.

The Undefeated is a poem and love letter to black life in the United States. It highlights the unspeakable trauma of slavery, the faith and fire of the civil rights movement, and the grit, passion, and perseverance of some of the world's greatest heroes.

Silliness for kids - While Petey's reevaluated what matters most, Li'l Petey is struggling to find the good in the world. Can Petey and Dog Man stop fighting like cats and dogs long enough to put their paws together and work as a team? They need each other now more than ever—Li'l Petey (and the world) is counting on them!

New Kid is a timely, honest graphic novel about starting over at a new school where diversity is low and the struggle to fit in is real, from award-winning author-illustrator Jerry Craft. Seventh grader Jordan Banks loves nothing more than drawing cartoons about his life. But instead of sending him to the art school of his dreams, his parents enroll him in a prestigious private school known for its academics, where Jordan is one of the few kids of color in his entire grade.

Stamped From the Beginning by Jason Reynolds
$18.99

Some Americans cling desperately to the myth that we are living in a post-racial society, that the election of the first Black president spelled the doom of racism. In fact, racist thought is alive and well in America - more sophisticated and more insidious than ever. And as award-winning historian Ibram X. Kendi argues in Stamped from the Beginning, if we have any hope of grappling with this stark reality, we must first understand how racist ideas were developed, disseminated, and enshrined in American society.

Puzzling on the move has never been easier with Mudpuppy's Puzzle To Go. Packaged in a travel-friendly drawstring pouch. - 36 pieces, 12 x 9" - Silkscreened muslin bag package with drawstring, 6 1/2 x 7 1/2" - Postcard with puzzle art included inside

Ready made for fall and winter, this resist beanie will keep your conscious head warm