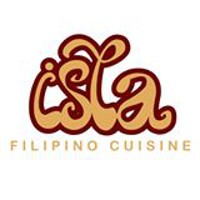 Spring egg roll with fresh vegetables (with or without) peanuts

Grilled chunks of BBQ pork on a stick

An original house broth with cabbage, potato and your own choice of the following: Manok (Chicken) / $8 Baka (Beef) or Baboy (Pork) $9

Tofu sauce made with garlic, fish and onions garnished with calamari and scrambled egg over thin noodles

A chinese dish of mixed vegetables and chicken

Taro leaves with pork and shrimp cooked in coconut milk

Tender strips of pork grilled and served with a special vinegarette

Pork ears, cheeks and soul! Braised, grilled, diced, served on a sizzling platter with an egg and chili peppers

Beef oxtail and green beans in peanut sauce; with a side of shrimp brine paste

Breaded, deep fried chicken with a side of banana ketchup

Chunks of pork served in a special gravy

Pork and diced potatoes, prepared with tomato and peppers

An unmistakable Filipino delicacy; Chunks of chicken and pork marinated in a special sauce of garlic, vinegar, and black peppercorn

Fried rice with chicken, made with our signature Adobo stew

Rich custard of egg and milk