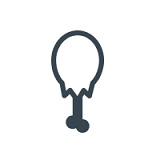 Chicken On The Run

Platter of Six halves with melted cheese, bacon and served with sour cream.

Louisiana style shrimp bites tossed in boom boom sauce and served over a bed of lettuce with banana peppers.

Your choice of any two items lettuce, tomato and mayonnaise.

A double decker with turkey, bacon, lettuce tomato and mayonnaise.

Hoagie with tomatoes, onion, mozzarella cheese and a choice of mushroom or pizza sauce.

A triple cheeseburger on a bun with two slices of American cheese and one slice of Swiss cheese, tartar sauce and lettuce.

Chicken fillet with grilled ham and Swiss cheese served on bun with fries.